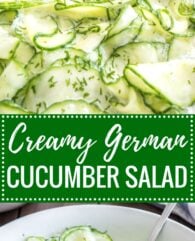 German Cucumber Salad is a refreshing summer salad made with simple ingredients that are a staple in most kitchens! This recipe is easy to make, budget-friendly, and perfect for a potluck, family dinner, or summer cookout.

German Cucumber Salad is light, refreshing, and so easy to make! A perfect salad to bring to a party or potluck. My family especially loves this salad in the summer months because it is so light and tastes super fresh. This recipe is similar to how my German Grandmothers make their cucumber salad. I say similar because none of them can ever tell how much of each ingredient they use. But it tastes like Oma made it!

Cucumber Salad is called Gurkensalat in German and is made with sour cream, vinegar, and fresh dill. Like most German salads, this one tastes best after it has chilled for a few hours in the fridge. You can make it up to one day in advance! Perfect for a big party or barbecue.

This easy salad tastes great with fish or meat. In Germany, cucumber salad is often served with Schnitzel.

Tools used in the making of this German Cucumber Salad

Mandoline Slicer: This slicer is the BEST! It’s super sharp, made in Germany, and you can slice different thicknesses, julienne, and shred. Perfect for super thin cucumber slices, coleslaw, and making homemade fries! I bought this for my husband’s birthday last year and he loves it.
Cut Resistant Gloves: Better also get a pair of these with the slicer! Trust me this thing is extremely sharp. Luckily we haven’t had any accidents since we bought these but I wish we had these a few years ago when my husband tried to make coleslaw.
Vinegar: I like to use this German seasoned vinegar for salads but you can also use distilled white vinegar, white wine vinegar or apple cider vinegar. But do NOT use balsamic vinegar! 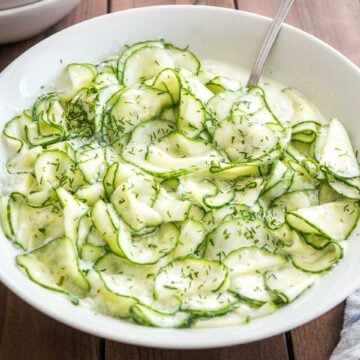 Calories: 45kcal
Did you Make this Recipe? Tag me Today!Share it on Instagram and tag @platedcravings or #platedcravings!
« Air Fryer Fried Chicken
Easy Strawberry Rhubarb Crisp »