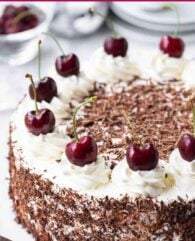 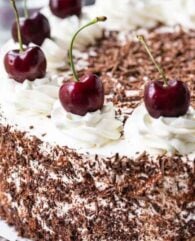 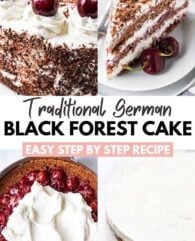 Black Forest Cake is a traditional German dessert made with chocolate sponge cake layers filled with whipped cream and cherries. This delicious cake recipe is completely made from scratch and perfect for special occasions!

Being born in Germany this cake was always one of my favorite desserts! It is served at every special family occasion and always a hit! Even now living in Canada we love serving German food for special occasions like this beautiful cake or our German Apple Cake, German Cucumber Salad, or Homemade Spaetzle.

Black Forest Cake is probably the most famous German Cake! Made with three layers of light and fluffy chocolate cake that are topped with homemade cherry filling and fresh whipped cream, this cake is a showstopper.

What is Black Forest Cake?

Where did black forest cake come from

How to make Black Forest Cake from scratch

The base for this cake is a fluffy chocolate sponge cake that gets its special texture from whipped egg whites. The egg whites make the cake rise and fluffy.

In order to keep as many tiny air bubbles in the batter as possible, the dry ingredients are sifted and carefully folded in with a spatula. Using an electric mixer or hand whisk would destroy the air bubbles and make the cake dense and compact.

You might ask why not bake the layers in separate pans but this would also alter the texture because the top and bottom of a cake are usually drier.

Using a serrated bread knife is the easiest way to cut the cake into three layers. Try to hold the knife as horizontal as possible and work slowly. Use a piece of cardboard or a special cake board to lift the layers off. This makes it also easier to transfer the layers back when you assemble the cake.

How to make cream for black forest cake

You will need a lot of whipped cream for this cake. I use a KitchenAid Professional so whipping up 4 cups of heavy cream is no problem. But if you’re using a smaller stand mixer or hand mixer it will be best to whip the cream in two batches.

The higher the fat content of the cream the better it will whip up. Heavy whipping cream usually has a fat percentage of 35% which works best. If you have difficulties getting the cream to stiffen up I recommend putting the whisk and bowl in the freezer for about an hour and making sure that the heavy cream is cold. Check out my post on how to make homemade whipped cream for more tips and tricks!

What can be used instead of kirsch?

Traditionally, Kirschwasser (also known as just kirsch) is added to the cake. In Germany, the law mandates that kirsch needs to be in the cake for it to be labeled a Black Forest Cake.

But if you don’t have kirsch or can’t use alcohol just leave it out and use some juice from the jarred cherries or extra cherry juice.

How to Assemble Black Forest Cake

I love the cherry filling in a Black Forest Cake, normally there is only one layer of the filling but because it is my family’s favorite part I double it. Some recipes just use whole cherries instead of the traditional cherry filling that you usually find in Germany, I prefer the cooked filling because it holds up longer and doesn’t bleed into the cream.

How to decorate black forest cake at home

Slide two pieces of parchment cake under the cake from opposite sides. This keeps the serving platter clean. Decorate sides of the cake with grated chocolate. Use a spoon or your hands to lightly press chocolate shaving onto the sides.

Then pipe 16 swirls (1 for each piece) of whipped cream on top. Start with two swirls opposite each other and so on, for a symmetrical look. Garnish a circle in the middle of the cake with remaining grated chocolate. Put a cherry on top of each cream swirl and refrigerate the cake until serving.

To decorate the cake I use fresh cherries with stems and pit (look great but harder to eat) or more jarred sour cherries (juice will bleed into the cream after a short time, so wait until just before serving). I’m not a fan of the sugary maraschino cherries you can find in the cake decoration aisle but those could be used too.

Should black forest cake be refrigerated?

Yes, a Black Forest Cake should always be refrigerated because of the whipped cream.

Can you make this cake ahead of time?

Yes, you can! You can make it 1 day in advance and store it in the fridge. It tastes best on the first and second day, after that it still tastes great but the texture of the cream will start to change.

What I like to do is to bake the sponge cake a day or two in advance, let it cool completely, wrap it in plastic wrap, and store it at room temperature. It will be easier to cut into layers after a day. Then make the cherry filling and whipped cream the night before and assemble the cake.

A Black Forest Cake does NOT freeze well because of the whipped cream. But you could freeze the chocolate sponge cake itself tightly wrapped in plastic wrap.

Reasons why your sponge cake might have turned out flat, collapsed after baking or is dense and compact

Tools and Ingredients Used to make this Cake

Springform Pan: A springform pan works best for this recipe, the ring will also help with assembling the cake
Flour Sifter: This fits right over your bowl and makes sifting so easy and less messy
Cake Ring: I prefer a special cake ring to assemble cakes because it has straight edges
Sour Cherries: Jarred sour cherries in light syrup work best 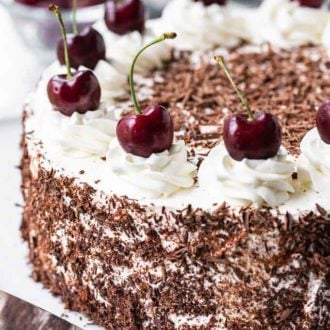 For the Cherry Filling:

For the Whipped Cream:

Note 1: I use jarred sour cherries for this recipe, Walmart has them in the International Aisle with the German Ingredients. They come already pitted and in light syrup. The light syrup works great as cherry juice. If you can’t find jarred cherries, you can use canned cherries or defrosted frozen cherries. If the cherries don’t come in light syrup, use cherry juice instead. Note 2: If you can’t use kirsch just leave it out of the cherry filling and drizzle the cake layers with some cherry juice. Note 3: I always use Dutch-process Cocoa Powder because that is the one that is common in Germany