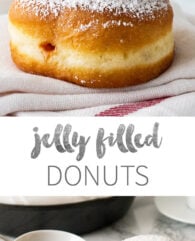 “Fasching” is a big thing in many parts of Germany, it has different names like Karneval or Fastnacht and people celebrate with parades and shows. The season begins on 11/11 at 11:11 am and ends just before midnight on Ash Wednesday the following year. But the last days of the season are the most important.

Last Thursday was “Weiberfasching” which means Women’s Carnival, on Monday is “Rosenmontag” and on Tuesday “Faschingsdienstag”. Everyone at the parades and shows wears costumes, even the kids at school and kindergarten.

Peter and I are from Franconia where Fasching is a really big thing. Many towns and villages have their own clubs for Fasching and organize big shows which include comedy sketches, dancing, and music (for example the biggest show in Bavaria: “Fastnacht in Franken”). When I was little I performed on stage with my kindergarten group as cowgirls and cowboys. Nowadays I’m not a big fan of this festivities but I’m still a big fan of Jelly filled Carnival Donuts. There are many names for Carnival in Germany but Carnival Donuts are eaten everywhere. In Bavaria they are known as Krapfen, in Hessen they call them Kreppel, many think they are “Berliner” but the Berliner call them Pfannkuchen (pancakes). I know it’s very confusing.

The filling differs like the name from region to region. In Franconia, they are traditionally filled with rose hip jam and in Berlin with plum jam but you can also buy them with vanilla cream or chocolate filling. A common German practical joke is to fill one secretly with mustard and serve it together with jam filled ones without telling anyone.

Jelly filled Donuts are best eaten fresh, after 1 day they get dry but you can freeze them (without sugar on top). The topping changes with the filling, I use powdered sugar because that’s how I grew up but you can also glaze them like regular donuts. 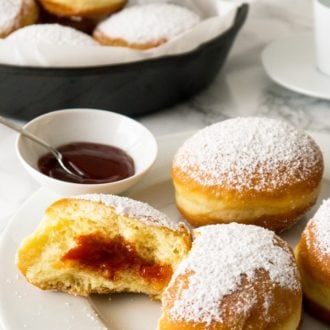