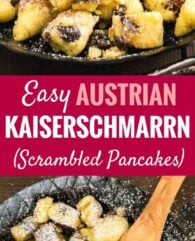 Kaiserschmarrn (Scrambled Pancake) is an Austrian dessert that’s also very popular in Bavaria! A sweet fluffy pancake made with rum-soaked raisins is torn into bite-sized pieces, caramelized, and served sprinkled with powdered sugar, applesauce, and preserves. This easy dessert recipe also tastes great for brunch and is loved by kids and adults alike! 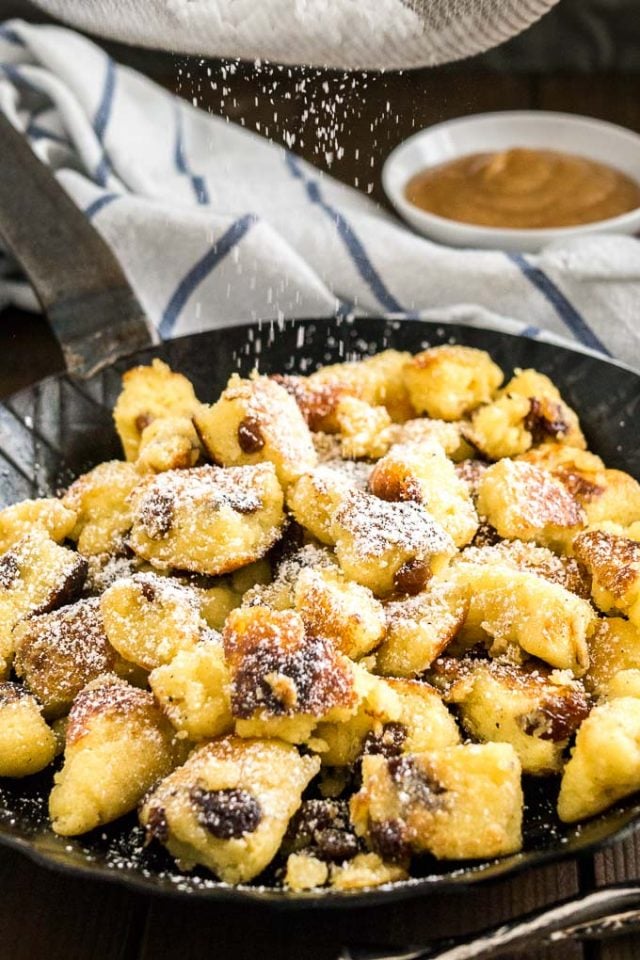 Kaiserschmarrn (or Kaiserschmarren) is also known as Emperor’s Mess, scrambled pancake, shredded pancake, torn pancake or Emperor’s Pancake. If you’ve ever been to Bavaria or Austria you’ve probably tried this sweet pancake dessert before! It’s one of the best desserts that exist on this planet and after you’ve taken your first bite you will be addicted (in a good way!).

This caramelized pancake dessert is my favorite sweet comfort food! It’s a great treat after a long day of skiing in the Alps. When we go to Austria this is my favorite thing to get at every ski lodge. But like many Austrian dishes, it is also very popular in Bavaria.

At the Oktoberfest (or Wiesn like it’s called in Munich), it is probably the most served dessert but there’s also a tent named after the famous Bavarian pancake dessert, the Café Kaiserschmarrn. But you don’t need to fly to Europe to try it, I’ll show you how easy it is to make it at home completely from scratch! 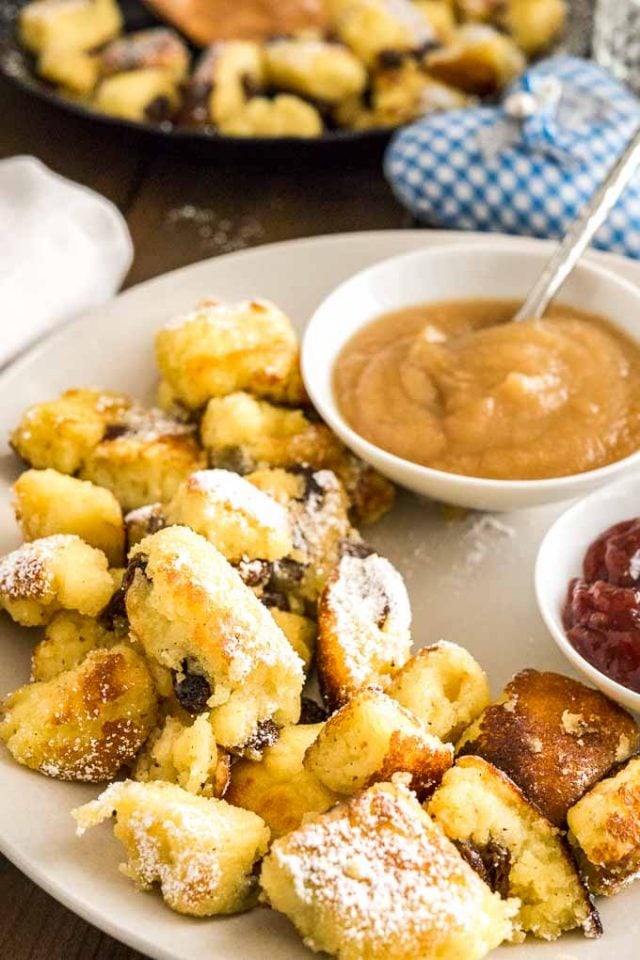 Kaiserschmarrn is best described as scrambled sweet pancakes. The name is a compound of the German words Kaiser which means Emporer and Schmarrn which can be translated as “a scrambled dish”.

This traditional German Pancake dish that originated in Austria during the time of Emporer Franz Joseph I is mainly served for dessert in Bavaria and Austria but it can also be eaten for brunch or lunch because it is quite filling. It is traditionally accompanied by Applesauce (Apfelmuss) and Zwetschgenröster, a fruit compote made from plums.

How to make Kaiserschmarrn

The base for this recipe is a fluffy pancake which you make by dividing the eggs and adding the stiff egg whites after you combined the other ingredients. There’s no baking powder in this pancake the egg whites do all the work. The batter is then baked in butter, torn into bite-sized pieces, and served with powdered sugar on top.

This easy Kaiserschmarrn recipe gets its special flavor from the eggs, the butter, the caramelized sugar but especially from the rum soaked raisins. Even my husband who isn’t the biggest fan of raisins loves them in this dessert! The raisins are soaked in a few tablespoons of rum while you make the batter. When the pancake begins to cook through, you add the drained raisins before turning the pancake. 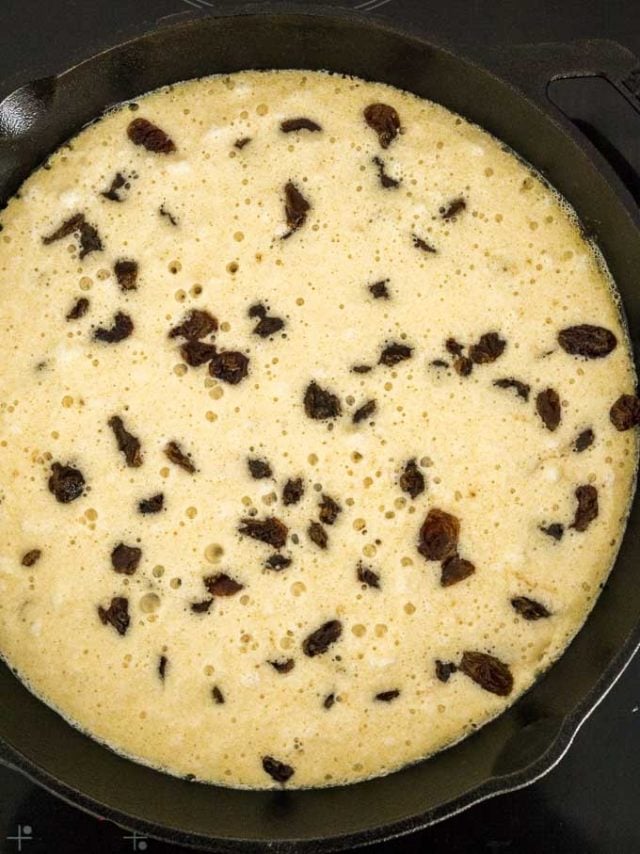 After you flipped the pancake and it’s getting golden brown underneath, comes the step which makes a special dessert out of a normal pancake. Using two spatulas or forks you tear the pancake into bite-sized pieces which will then be caramelized with butter and sugar. 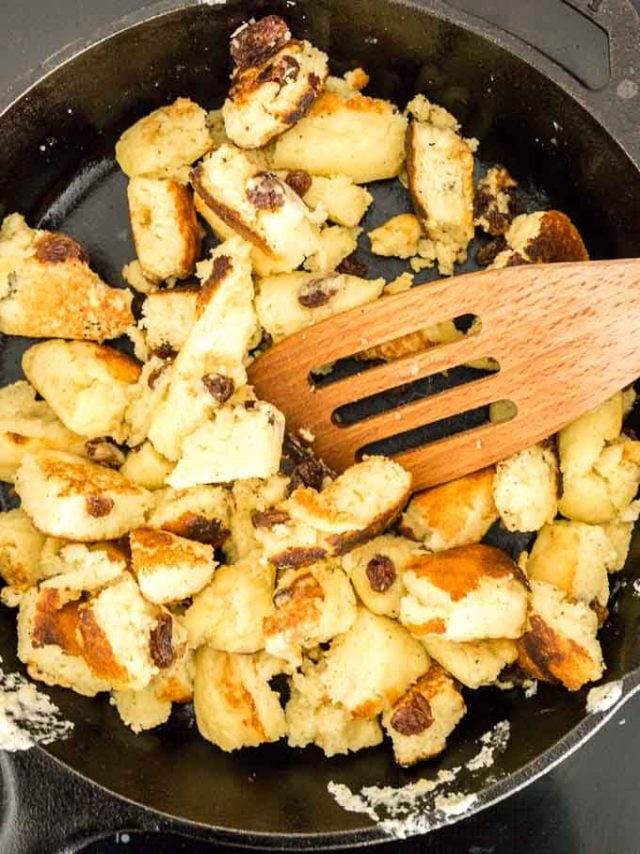 This authentic Austrian pancake recipe is definitely for days when you want to indulge! It’s a special treat and one pan is enough for up to four people as a dessert served with applesauce. You can also serve it with other fruit compotes, fresh berries, and vanilla ice cream.

When you order this dessert at a Bavarian or Austrian restaurant or at the Oktoberfest it’ll probably be served in a skillet with lots of Confectioners’ sugar on top! I like to do the same at home. And another thing that always happens at the Oktoberfest but also at home: You’re already full but there’s still some room for Kaiserschmarrn in your belly (or at least you think so :-) ). Because who could resist? Definitely not me!! 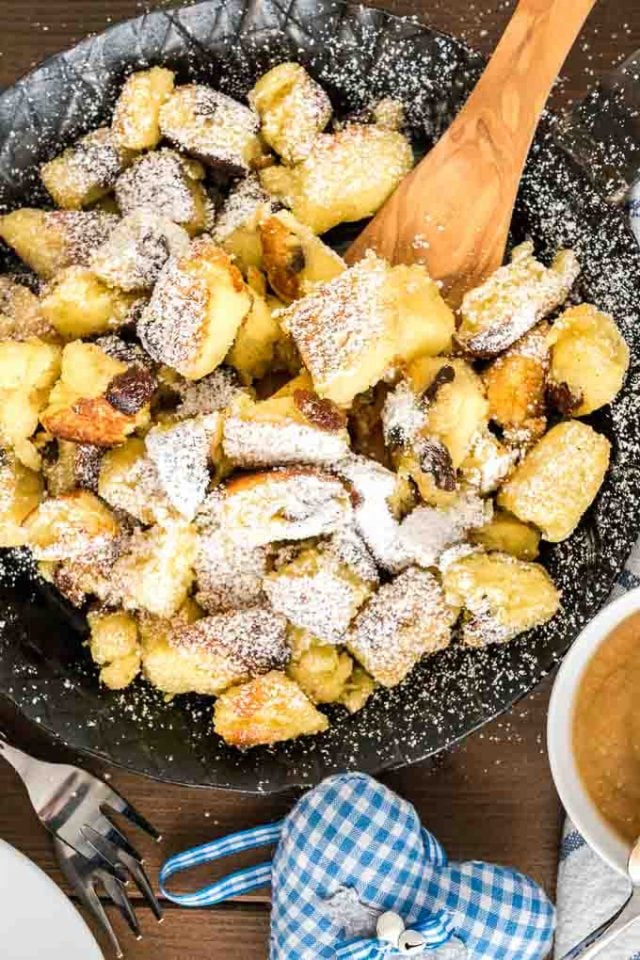 Tools used for making this recipe:

Cast-Iron Skillet: I love this skillet! It’s probably my most used one, it’s oven-safe, super affordable and lasts forever.
Stand Mixer: My most used kitchen appliance and it’s so pretty it can sit on the counter as decoration!

WANT TO TRY THIS KAISERSCHMARRN? 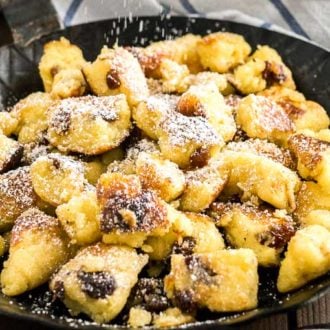 For the rum-soaked raisins: 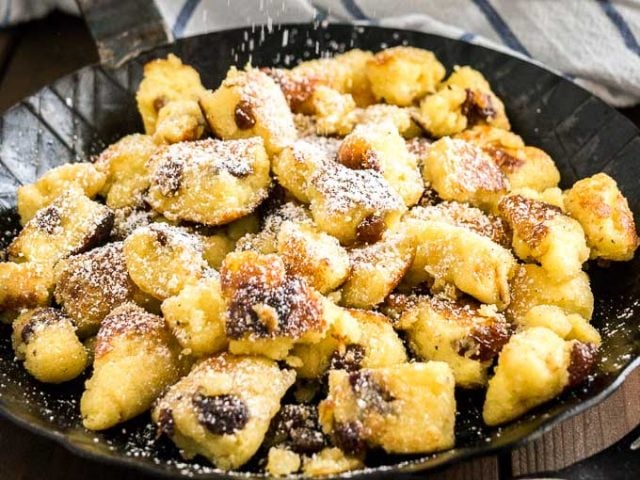