Beer Chili con Carne is my husband’s favorite dish to make when his friends come over! A hearty meal made with beer that is sure to be a crowd-pleaser. Yes, it’s true this is my husband’s favorite thing to cook. I’m usually not allowed near the pot but he made an exception this time so I can share his recipe with you.

He often made this beer chili con carne for his friends in college and everyone was addicted! He makes this easy chili with different beers. His favorite beer is a German beer called Schlenkerla which tastes kind of smoked, a little bit like drinking black forest bacon.

But you can use any beer you like or have at home, we prefer using German beer because it’s what my husband likes most. He also uses a special spice mixture to season the ground beef which gives the chili a deeper flavor and makes it spicy but still really flavorful.

To make this chili you first season the meat then you saute the chopped onions. Add the seasoned ground beef and cook until a bit it’s brown on the edges then deglaze the pot with the beer. Now it’s time to add the tomatoes and let the chili simmer for a few minutes.

The last step is to add the beans and the sweet corn if you’re using it. We love to add corn to our chili because adds more texture and I really like the sweetness it adds. I know many people don’t like corn in their chili but for me it’s an essential part of the recipe.

Serve this chili topped with grated cheddar cheese, a dollop of sour cream and my Cheesy Pumpkin Dinner Rolls! And if you need a dessert, my husband loves this German Apple Streusel Sheet Cake. It’s big enough to feed a crowd! 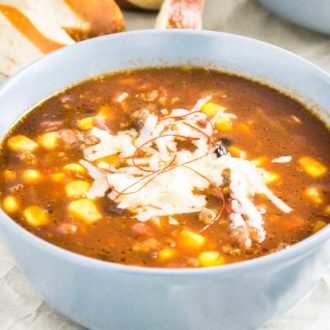 Beer Chili con Carne is my husband's favorite dish to make when his friends come over! A hearty meal made with beer that is sure to be a crowd-pleaser.
Prep Time: 10 minutes
Cook Time: 30 minutes
Total Time: 40 minutes
Course: Main Course
Calories: 638kcal
Author: Julia Foerster
No ratings yet
Print PIN RECIPE Rate

Calories: 638kcal
Did you Make this Recipe? Tag me Today!Share it on Instagram and tag @platedcravings or #platedcravings!