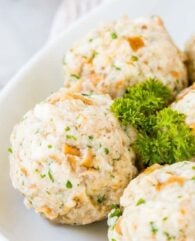 German Bread Dumplings are a perfect side dish for anything with gravy! This traditional Bavarian recipe made from stale bread tastes so delicious with roasts or a simple mushroom sauce.

Bread dumplings are a traditional Bavarian side dish, made from bread, milk, onion, eggs, and herbs. When cooked, the dumplings are airy, have a tender texture, and go with anything saucy, like a roast, goulash, Jagerschnitzel, but they also taste delicious served with mushroom sauce for a vegetarian option.

If you like stuffing, you will love this traditional German recipe! The ingredients and texture is kind of similar. Semmelknödel are pretty easy to make, much easier than Kartoffelklöße (potato dumplings) in my opinion and they go perfect with anything that comes with gravy or sauce! Serve them with a roast, goulash, and more!

Why is this recipe the BEST

How to make Bread Dumplings

Detailed measurements and instructions can be found at the bottom of the page on the printable recipe card.

Delicious Variations of this recipe

Traditionally Semmelknödel can be served as a side dish or main dish! In Germany, you can also often find knoedel with gravy (“Kloss mit Sosse”) on the kid’s menu, it’s a childhood favorite of mine.

As a side dish: Bread dumplings go with anything saucy like roasts, pork tenderloin, or Goulash. German roasts are often served with a dark sauce that is made with beer and caraway seeds, which compliments the taste of the dumplings very well.

As the main dish: Bread Dumplings are also often served as a main dish topped with mushroom sauce (coming soon). This is a popular vegetarian dish that is on the menu of many German restaurants and so easy to make at home. 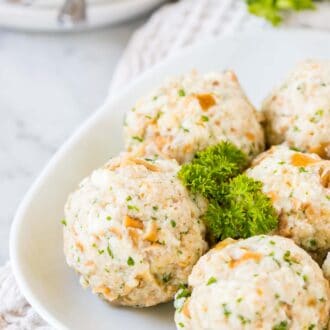 German Bread Dumplings are a perfect side dish for anything with gravy! This traditional Bavarian recipe made from bread can be rolled into balls or a log.
Prep Time: 15 minutes
Cook Time: 30 minutes
Total Time: 45 minutes
Course: Side Dish
Cuisine: German
Calories: 262kcal
Author: Julia Foerster
5 from 3 votes
Print PIN RECIPE Rate