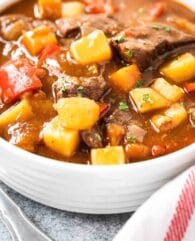 Hungarian goulash is rich, comforting, and so easy to make from scratch! Loaded with melt-in-your-mouth tender beef and flavorful vegetables this slow-cooked stew is perfect for cold winter days and also known as German Goulash. 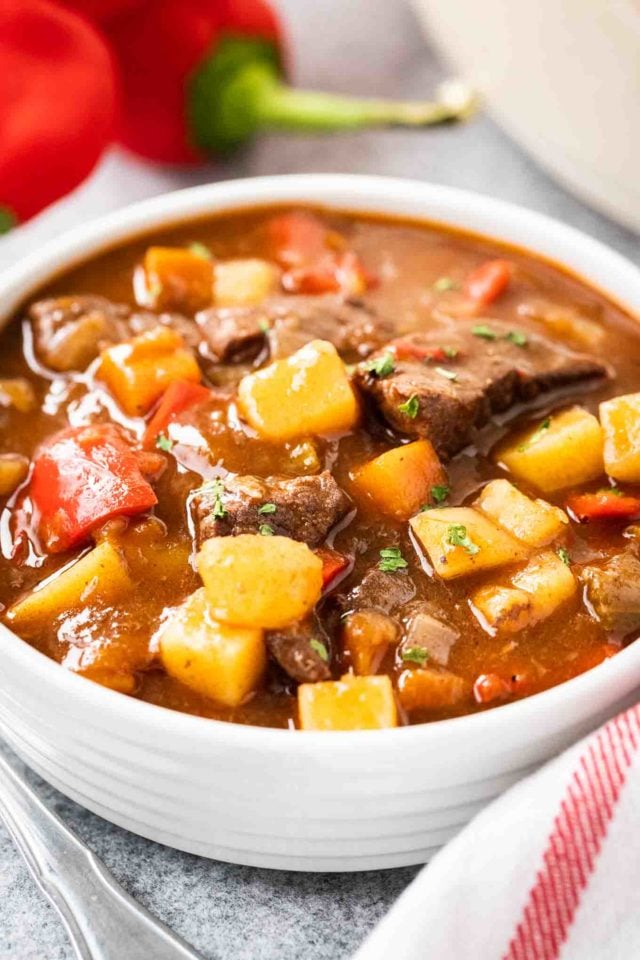 This comforting Beef Goulash recipe is the perfect meal for cold weather that the whole family will love! A delicious beef stew made with a rich broth flavored with paprika and red wine. We love comforting recipes during the colder months like Cheese Spaetzle, Kaiserschmarrn, and Easy Potato Bacon Soup, and this rich and filling stew is a favorite in our house all season long!

Serve it with rustic bread, over egg noodles, with German Spaetzle or add chopped potatoes and red bell peppers. My favorite way to eat it is with potatoes and peppers because it is the easiest way to transform this simple paprika beef stew into a full meal and it is perfect for feeding a crowd! 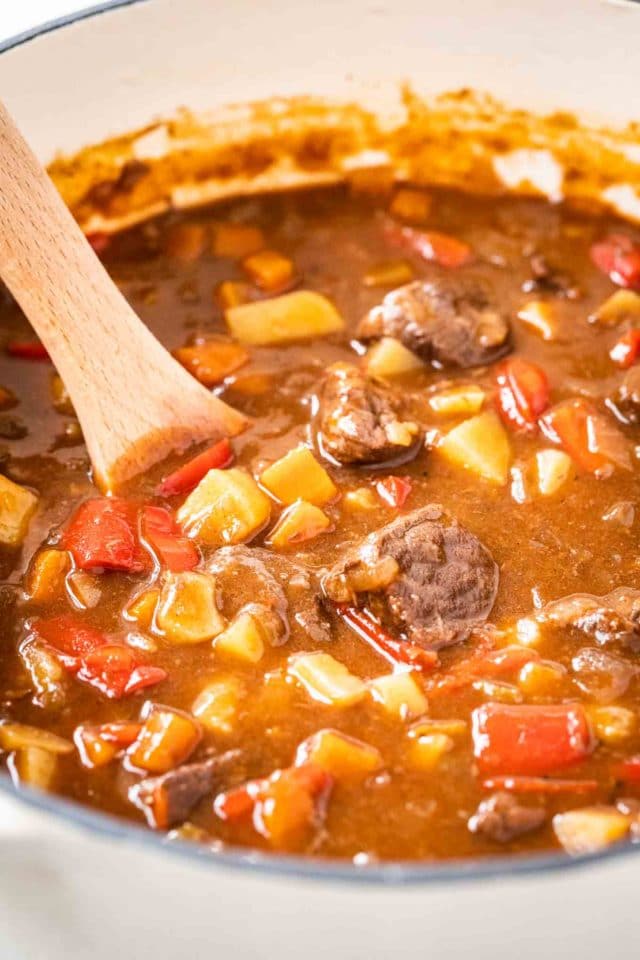 How to make Hungarian Goulash

Hungarian Goulash is very different from American Goulash which is made with ground beef and macaroni. To make traditional Goulash you want to start with lots of chopped onions. This stew is made with equal parts of beef and onions and lots of Hungarian paprika. I prefer to use sweet Hungarian paprika but you could also use the spicy variety if you like it hot.

Saute the onions, carrot, and celery in butter and oil. You could also use lard which is the traditional way but hard to get your hands on. When everything is soft and nicely browned add the tomato paste. The paste will get super flavorful when you saute it for a minute. Then add the paprika but be careful to not let it get burned. Next step is to add wine and broth, scrape the bottom of the pot so all the browned bits get loosed, this adds extra flavor.

Add the beef and spices, then bring it to a low simmer and let cook until the meat is tender. Some recipes recommend browning the beef as an extra step, in my experience, it isn’t worth the extra effort (and kitchen renovation) for this type of stew because it already has enough depth of flavor thanks to the paprika, wine, and sauteed veggies.

You can keep this recipe as simple as you like, it tastes incredibly delicious without any added extras. But adding a few chopped bell peppers and cubed potatoes is a great way to make this simple dish even more delicious and filling without much effort. 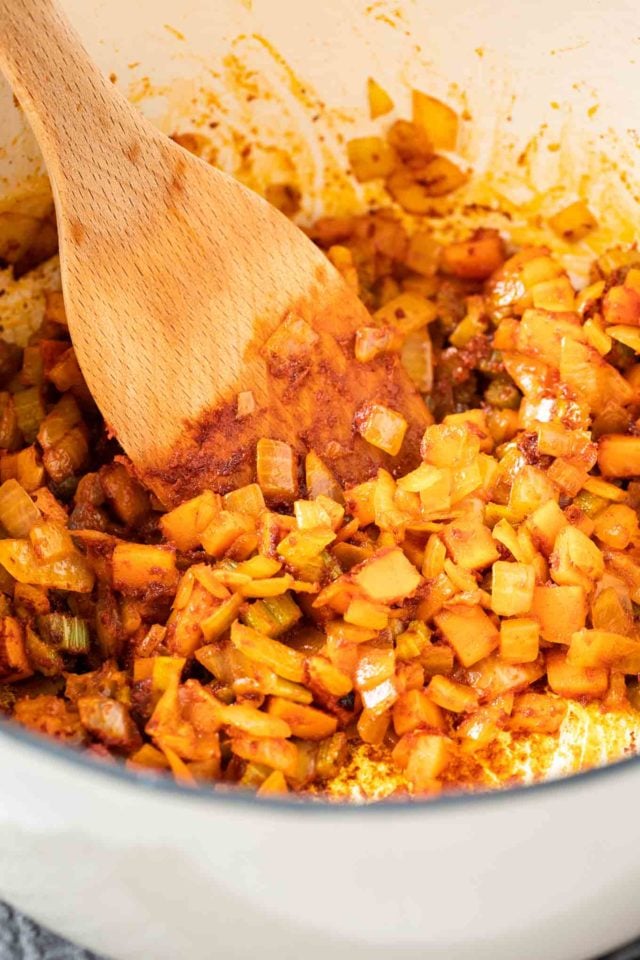 Tips and Tricks for making the BEST Hungarian Goulash Recipe 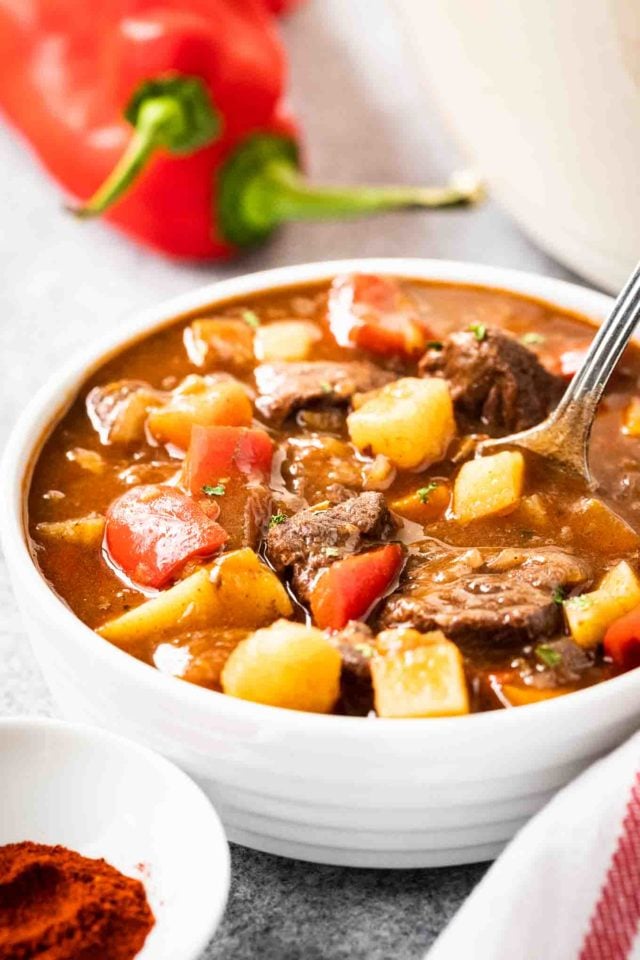 What to serve with Beef Goulash 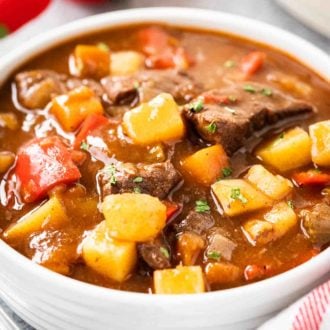