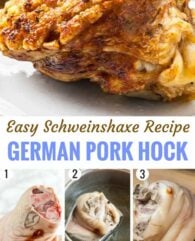 German Pork Hock, also known as roasted ham hock or Schweinshaxe, is a traditional Bavarian dish that’s popular not only during the Oktoberfest but all year round. This easy pork knuckle recipe takes a few hours but cooks without too much effort on your part and rewards you with delicious pork crackling and tender meat. Hands down one of my favorite German recipes! 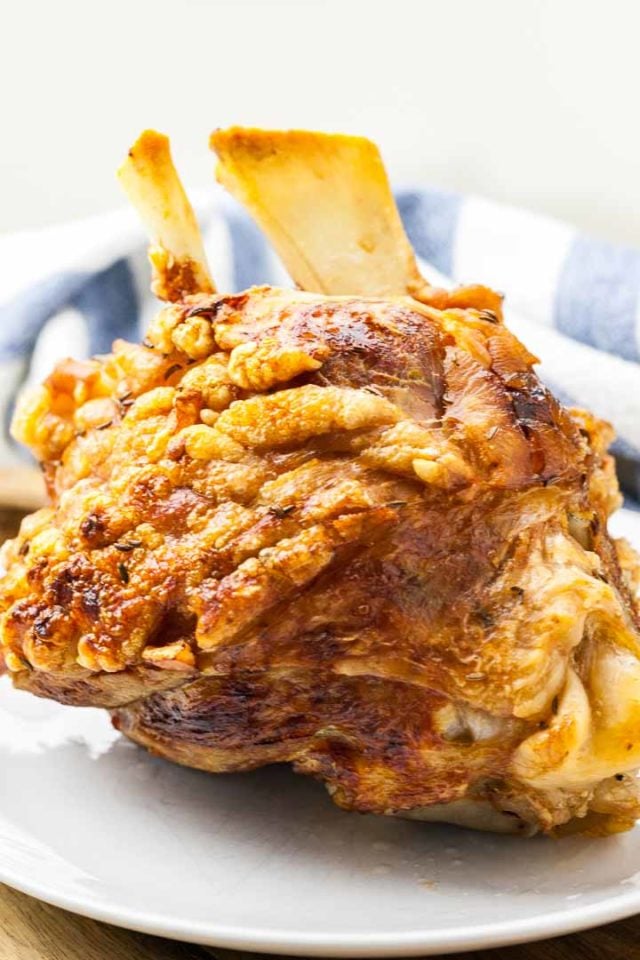 This roasted pork hock has been a favorite of my husband for a while now. When I think of a German Schweinshaxe this is exactly how I want it to be: super crispy pork rind and tender, flavorful meat. If you’ve ever been to Munich you know what I’m talking about!

You can make Schweinshaxen two different ways: roast it or put it in water and then roast it. My preferred way, because it always makes perfect roasted pork knuckles at home, is to let the knuckle simmer in water first and then roast it in the oven to perfection. This cooking method ensures that you have a crispy skin, tender meat, and great flavor.

What is a pork hock?

A pork hock is also known as ham hock, pig knuckle, or pork knuckle. It’s the joint at the bottom of the shank of the pig between the tibia/fibula and the ankle where the foot was attached to the hog’s leg but it’s not part of the ham. The pork knuckle contains a lot of connective tissue which when it melts add great flavor and texture to the meat. It’s a relatively cheap cut of meat.

To make authentic German Schweinshaxen (Schwein = pig, Haxe = hock) you need a fresh, uncured, unsmoked pork knuckle. Schweinshaxen are usually made from the rear legs because they have a thicker layer of fat, but pork hocks from the front legs can also be used. One knuckle serves about two adults depending on the size. (photo 1)

How to cook ham hocks – Step by Step

Bring water in a big pot to a boil, add salt, onions, peppercorns, bay leaves, and juniper berries. Then submerge the pork hock in the water and let simmer at a low temperature for 90 minutes. (photo 2) 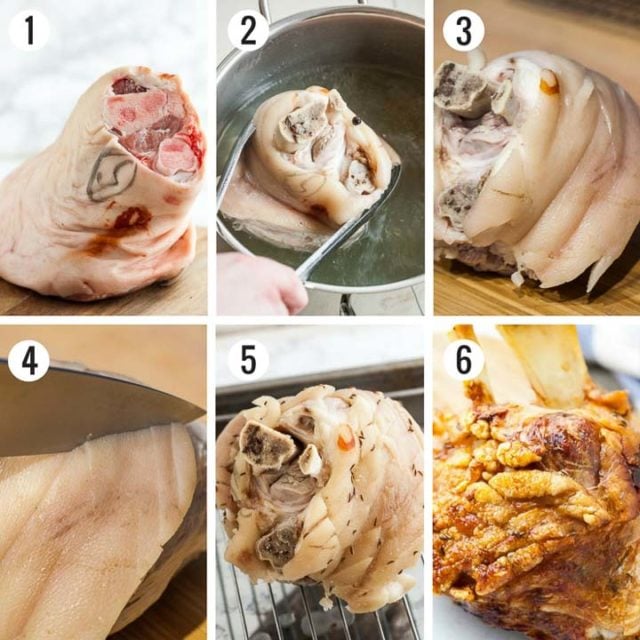 After 90 minutes use tongs to remove the pork knuckle from the water and use a sharp knife to incise the skin in a diamond pattern. This allows the skin to crisp up better and makes it easier to eat it after roasting. (photo 3 and 4)

How long to cook ham hocks in the oven

Rub the pork knuckle with caraway seeds and salt while preheating the oven to 390°F (200°C). Place the hock on a rack in a roasting pan and bake for 90 minutes. (photo 5)

To crisp up the skin turn on the broiler for the last 5-10 minutes. Keep an eye on it because it can get burned pretty quickly. The skin will crackle and get super crispy. (photo 6) 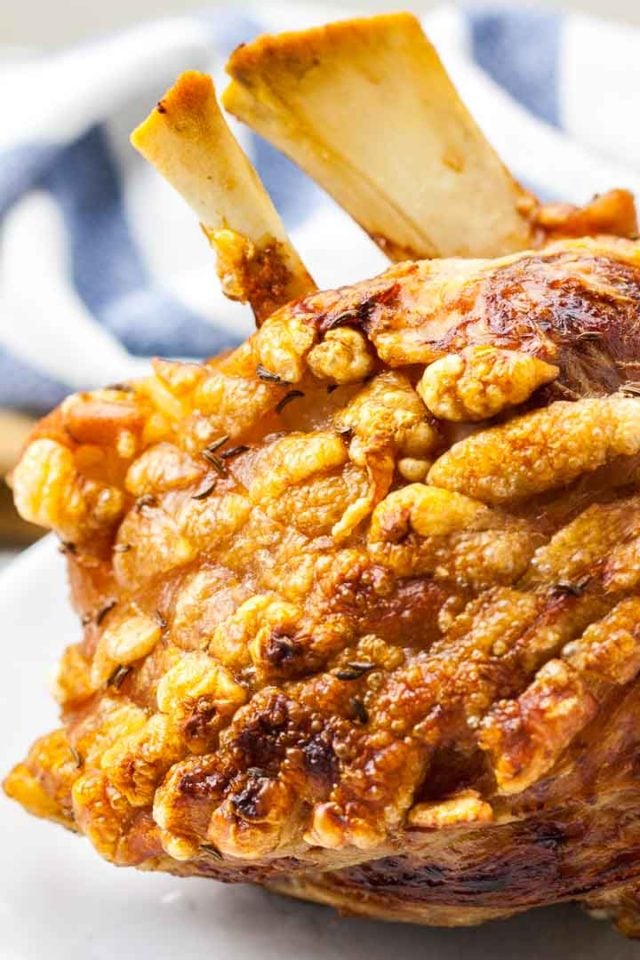 What to serve with Schweinshaxe

Can I double this recipe?

Yes, you can double this recipe if you have a large enough pot or use two pots. The pork knuckles should be submerged in the water.

Is a pork hock the same as a ham hock?

Can I give my dog a pork hock?

No, you can’t give the bone from the pork hock to your dog because they easily splinter and are even softer after cooking. 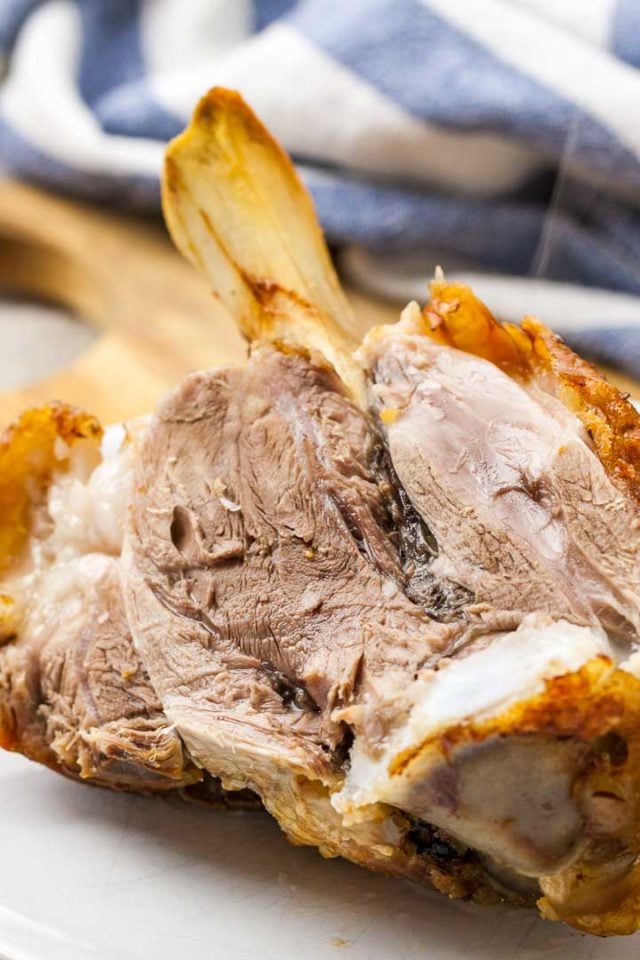 Tools used to make this recipe:

You want to use a roasting with a rack so that the ham hock gets crispy on all sides. The pan catches the dripping and makes clean up easier.
Caraway Seeds: You need whole caraway seeds for this recipe.

To cut the skin into a diamond pattern it’s best to use a sharp knife. The skin is much easier to cut after it has been submerged in water for 90 minutes but you make it easier for you if you use a good knife. 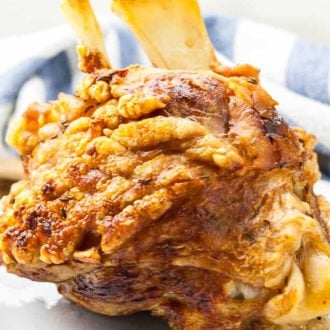 German Pork Hock, also known as roasted ham hock or Schweinshaxe, is a traditional Bavarian dish that's popular not only during the Oktoberfest but all year round. This easy pork knuckle recipe takes a few hours but cooks without too much effort on your part and rewards you with crispy pork crackling and tender meat.
Prep Time: 10 minutes
Cook Time: 3 hours
Total Time: 3 hours 10 minutes
Course: Main
Cuisine: German
Calories: 220kcal
Author: Julia Foerster
4.95 from 34 votes
Print PIN RECIPE Rate