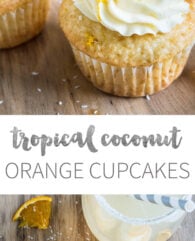 The last days were very summerly, everyone was out and the beer gardens were full! I have to admit we’re both not the biggest fans of being outside at the moment because of our hayfever which makes spring a bit difficult.

But if we can’t be outside as much as we want we bring the spring into our house. These sweet little Orange Popsicle Cupcakes taste like spring and summer. Is it weird to say they’re tasting refreshing? But they really do!

They make a perfect afternoon treat with some cold lemonade. I love to add fruit to cupcakes and muffins like in my Raspberry Muffins with Streusel Topping or in my Skinny Oatmeal Apricot Muffins. These Cupcakes are flavored with oranges. At the moment, I’m loving the San Pellegrino Limonata. It’s not as sweet as normal lemonade but so refreshing. You can get a few different varieties, I like the lemon and orange version best. Perhaps next time I make these cupcakes I will add 1/2 cup of Aranciata to the batter instead of normal orange juice.

So while I made these cupcakes I tried to incorporate as much of the orange into the cupcake as possible. The zest of the orange is really flavorful. You have to be a bit careful not to grate too deep, stop before you reach the white pith which will otherwise give you a bitter taste.

I use a Microplane grater for this job because it grates really fine and is really sharp (be careful not to grate your fingers! Yes, that happened to me before :-( ). I use it upside down so that the peel “collects” on top of the grater and I can easily add only the right amount.

I also used the orange fillets. Filleting an orange looks a bit tricky if you have never done it before but it is really simple. You need a sharp knife and peel your orange with it so that all of the outer white pith is removed. Then you cut out the flesh segments between the membranes which separate the orange slices. In the end, you will only have fruit flesh without any white pith. Cut the fillets in smaller pieces and add them to the batter.

These orange pieces will make the cupcake moist and fruity. The rest of the orange after you cut out the fillets will still have enough juice to fill 1/2 a cup which we need for the batter. So don’t discard it, use your hands to juice the orange and voila we used the whole fruit. What I have for you today is an orange-infused coconut vanilla cupcake with two versions of toppings. One is your traditional vanilla buttercream with a bit of orange zest and orange juice and the other one is perfect for hot summer days where you want something a little bit lighter: an orange glaze.

I like frosted cupcakes but glazed cupcakes make life so much easier in my opinion. Storing and transporting them is easier, you don’t have to keep them in the fridge where the cupcakes get hard and you can eat two glazed ones instead of one frosted cupcake.

In my opinion, the frosted ones are best eaten on the same day but the glazed ones are good for three days. So you decide how you like your Orange Creamsicle Cupcakes! Frosted or glazed? Or do it like me and make 6 with buttercream and 6 with glace on top. Best of both worlds :-) 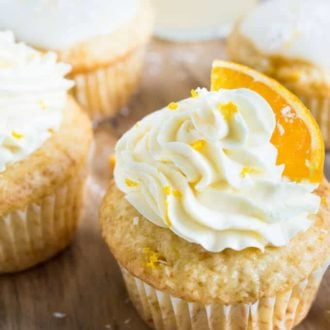 Did you Make this Recipe? Tag me Today!Share it on Instagram and tag @platedcravings or #platedcravings!
« Curried Cream of Corn Soup
Spinach Ricotta Puff Pastry Parcels »