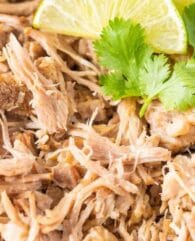 How to make the perfect Slow Cooker Carnitas! This easy Crock Pot recipe makes the most flavorful Mexican pulled pork with only a few minutes of prep.

This recipe is very similar to our Slow Cooker Pulled Pork Gyros and is just as easy.

Making Pork Carnitas in the Slow Cooker is so easy and only takes a few minutes of hands-on work. It makes juicy and tender Mexcian pulled pork that is perfectly seasoned and tastes delicious on tacos, enchiladas, burritos, and sandwiches.

Why This Recipe Works

The Crock-Pot Carnitas recipe that I’m sharing today is by far the best Carnitas recipe because by cutting the meat into chunks you have more surface for the spice mixture which results in more flavor and the meat will cook faster and more evenly. It also uses ingredients that you probably have on hand and has just a hint of spiciness which makes it perfect for the whole family.

Carnitas is the Mexican version of pulled pork. It is traditionally made by simmering pork in oil or lard until tender for three to four hours. Making it in a slow cooker is not authentic but combined with pan-frying gives you similar results without the hassle of a big pot of oil.

How to make Carnitas in the Slow Cooker

What cut of meat to use for pork carnitas?

A skinless and boneless pork shoulder roast works best in my experience. The pulled pork will be juicy and tender and can easily be shredded with two forks. Trim off excess fat but leave some of the fat on because it adds flavor.

This recipe works for roasts between 3-5 lbs. No need to adjust seasoning or timing.

My Secret for a more authentic flavor

Carnitas are traditionally simmered in oil so you have some crispy bits. To get a similar texture I recommend pan-frying the shredded pork in a skillet with some oil until golden. This method keeps the meat juicy while also adding crispiness.

For a larger crowd crisping it up in the oven is more convenient but dries the meat out a little bit more than pan-frying. After shredding the meat into smaller chunks spread it out in a thin layer on a baking sheet and bake it in a 400 F oven about 20 minutes to crisp up the exterior of the meat or pan fry it in some oil until golden.

What to serve with Carnitas

It also tastes great in Enchiladas, Burritos, Quesadillas, and Sandwichs. Pork Carnitas are very versatile and can be used in so many recipes. Because it can be made ahead, it is perfect for parties and potlucks!

How long is Crock Pot Carnitas good for?

Storing: Store shredded pork carnitas in a container in the fridge for up to 3 days. Pan-fry to reheat. Save some of the cooking liquid to moisten the meat after pan-frying.

Freezing: This keeps for up to 3 months in an airtight container in the freezer.

Can you make Slow Cooker Carnitas ahead of time?

You can make Slow Cooker Carnitas ahead of time and pan-fry to reheat. You can also pan-fry it or crisp up in the oven, then transfer to a slow cooker on the warm setting and cover with the lid – perfect for potlucks or big crowds! 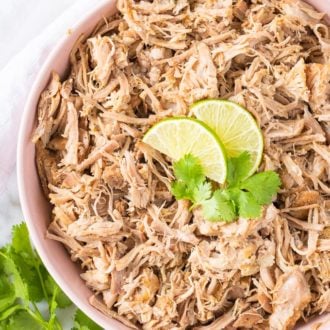 For the Spice Mixture