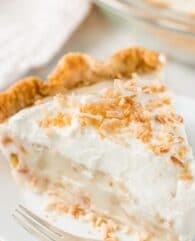 Cream Pies like our Lemon Cream Pie, Oreo Banana Cream Pie, and our Key Lime Pie make a great dessert all year round.

This creamy Old-fashioned Coconut Pie with pudding filling makes a perfect dessert to bring to a potluck or serve after dinner! It is so silky, delicious, and can be prepared in advance.

Depending on how much time you have you can either use a prebaked pie shell, refrigerated pie dough or make your own pie crust. The pudding filling needs to set for a few hours in the fridge so I always make this pie a day ahead and top it with freshly whipped cream just before serving!

How to Blind Bake Pie Crust

Coconut Cream Pie has a no-bake filling but the pie crust still needs to be baked before it can be filled. Start with rolling out the dough. I love using my OXO Pie Dough Rolling Bag for this. Rolling the dough out to a 12-14-inch diameter is ideal for 9-inch pie plates.

Place the pie crust into a 9×2-inch round pie dish, use your fingers to tuck it in, trim the overhang and flute the edges (Check out this video). Fluting the edges gives the pie a pretty look without much effort. I always put the pie crust in the fridge for about 30 minutes or place it in the freezer for 10 minutes if I’m short on time because it makes it flakier.

Steps for blind baking the crust:

How to make Coconut Cream Pie

How to make homemade whipped cream

To make whipped cream, you need 1 cup cold heavy cream and 2 tbsp powdered sugar. For this pie, I also like to add 1 tsp of coconut extract to the cream. To make it easier and more foolproof, place a metal mixing bowl and metal whisk into the freezer for 10 to 15 minutes. Put the sugar into the mixing bowl and add the whipping cream. Beat just until the cream reaches stiff peaks about 1-2 minutes. Don’t overwhip or you will end up with butter.

How to store Coconut Cream Pie

Because of the fresh cream, this pie should not sit out on the counter for longer than an hour. It tastes best cold and keeps covered with plastic wrap for 2-3 days. Cream pies don’t thaw well so I would not recommend freezing this recipe.

Tools and Ingredients used for Making this Recipe

OXO Pie Dough Rolling Bag: This silicone bag makes rolling out pie dough so easy. It’s also perfect for pizza.
Pie Plate:  This pie plate is made from borosilicate glass so you can transfer it directly from the freezer to the oven without the risk of shattering. 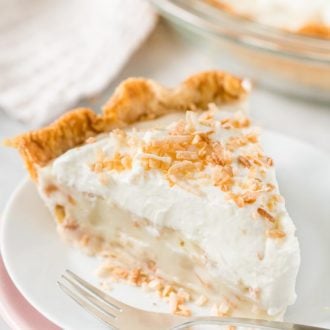