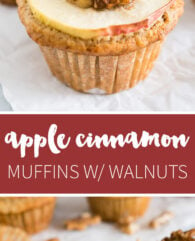 Apple Cinnamon Muffins are made with brown butter and topped with caramelized walnuts! They have a secret filling which makes them extra moist and delicious. I feel like fall is here. It has been raining since Saturday and it’s under 60°F which feels so nice after the heat we had in the last weeks. And what better way to start a chilly fall day than with these delicious Apple Cinnamon Muffins for breakfast!

These are not normal Apple Cinnamon Muffins – they are one of the BEST muffins to come out of my oven! Topped with apple rings which are my favorite healthy snack AND caramelized nuts which already have a special place in my heart because they’re the best topping for everything (If you haven’t tried my Banana Nut Maple Muffins or my Banana Bread with Maple-Walnut Topping you need to make them asap, they’re also topped with caramelized nuts).

I have to admit I’m a little bit proud of myself because these muffins are SO delicious and full of all these cozy fall flavors like apple, cinnamon, AND a special ingredient which makes everything 10 times tastier in my opinion: BROWN BUTTER. Brown Butter might be one of the most underused ingredients in my opinion. But it’s so easy to make! You need under 5 minutes to make a batch of delicious brown butter which will pack extraordinary flavor into everything you make with it.

It’s a perfect companion for all those fall delights like pumpkin or apples. Brown butter has a nutty, caramel-like flavor which pairs perfectly with sweet treats but is also great for savory dishes like gnocchi. Last year when we went to the Oktoberfest I had spinach pretzel dumplings tossed in brown butter for lunch. So simple but one of the most delicious things I have ever eaten. I definitely need to recreate this dish!

But back to these yummy apple muffins! What makes them even more delicious is the filling!

These muffins are extra moist and full of apple flavor because they are filled with a mix of grated apple, cinnamon, and brown sugar. To get the filling in the muffins you divide only half of the batter between the muffins cups, then add a spoon full of topping on top and then fill up the cups with the remaining batter to the brim.

It’s easier when you make a little dent in the batter before adding the filling and use cupcake liners. When the muffins cups are filled with batter it’s time to add the topping! Each of these little fall treats is topped with an apple ring and caramelized walnuts. For 12 muffins you need one apple for the filling and two apples for the rings. You don’t have to peel the apples, I love the color it adds to the muffins. Use an apple corer (I like this one) and then cut the apples into rings. Eat the smaller rings and use the rings from the middle part of the apples for the muffins.

Top each muffin with a ring. It’s ok if the ring is bigger than the muffin cup because the muffins will rise over the brim of the pan. Combine chopped nuts, cinnamon, maple syrup, and brown sugar and add about 1/2 tbsp of the nut mix on top of the muffins into the hole of the apple ring. The nuts will caramelize during baking and taste super delicious! These muffins taste so good fresh out of the oven when the filling inside is still warm but they also freeze great!

They’re definitely one of my fall favorites this year! And from now on I want to use brown butter in everything. It’s so good! I think I’m addicted to that nutty, toffee-like flavor.

I’m so excited for you to try this recipe!