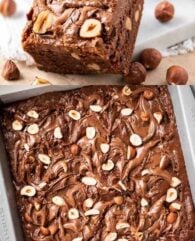 Nutella Brownies are swirled with Nutella and hazelnuts for extra flavor! These loaded brownies are so fudgy and make an indulgent afternoon snack or dessert that is every Nutella lover’s dream! 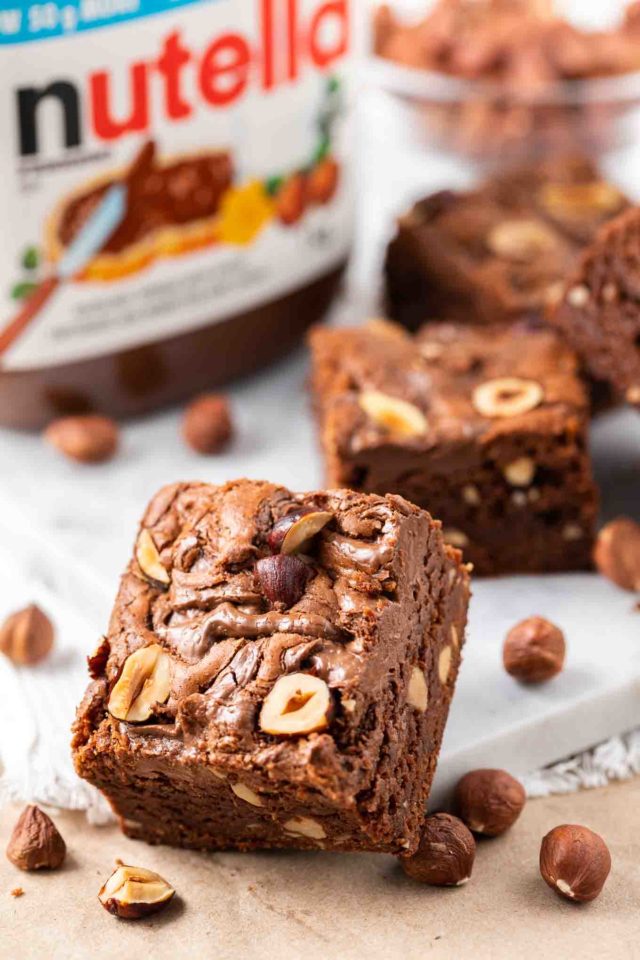 This Nutella Brownie recipe is one of those treats that are gone in seconds! They are not overly sweet so the Nutella flavor can be the star with a perfect brownie texture and a little bit of crunch from the perfectly roasted hazelnuts which are what Nutella is made from.  The secret to the perfect Nutella Brownies is not overloading the batter but swirling big dollops of Nutella on top instead.

How to make Nutella brownies

There are so many different Nutella brownie recipes – Nutella filled brownies, 3 ingredient Nutella brownies, even Nutella brownies with only 2 ingredients – but after trying many, I found that they often lacked that distinctive Nutella flavor, had a weird texture and just tasted too sweet and sugary or where overloaded with pure Nutella which might sound like a good thing but if you have ever tried to eat more than a few spoonfuls of Nutella then you know what I mean.

This Nutella Brownie recipe has the best of both worlds – a fudgy brownie with a great texture, Nutella-flavor, a bit of crunch and swirls of pure Nutella spread that are creamy and add a different texture and so much real Nutella flavor without overloading the brownie. 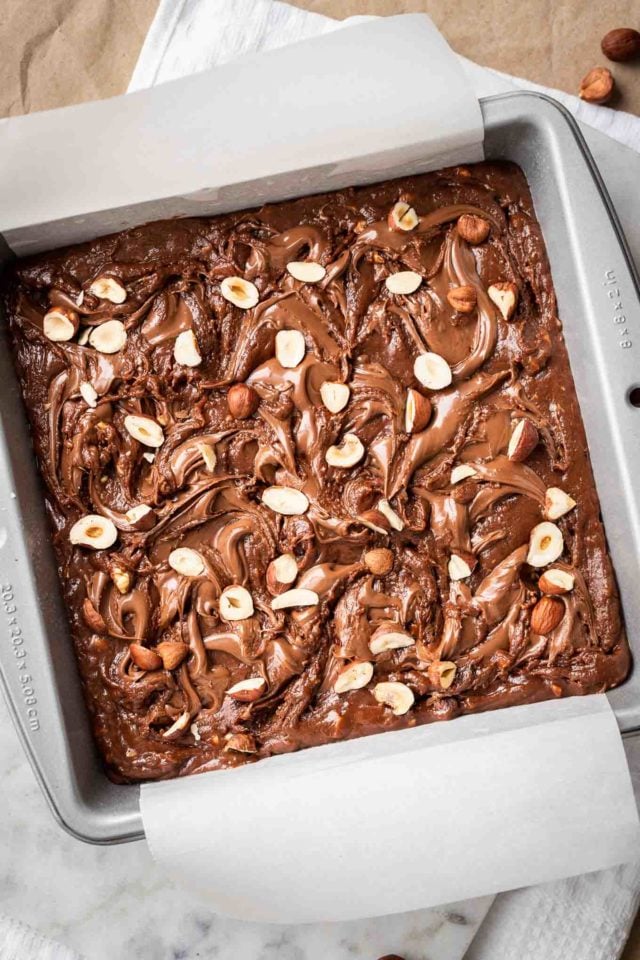 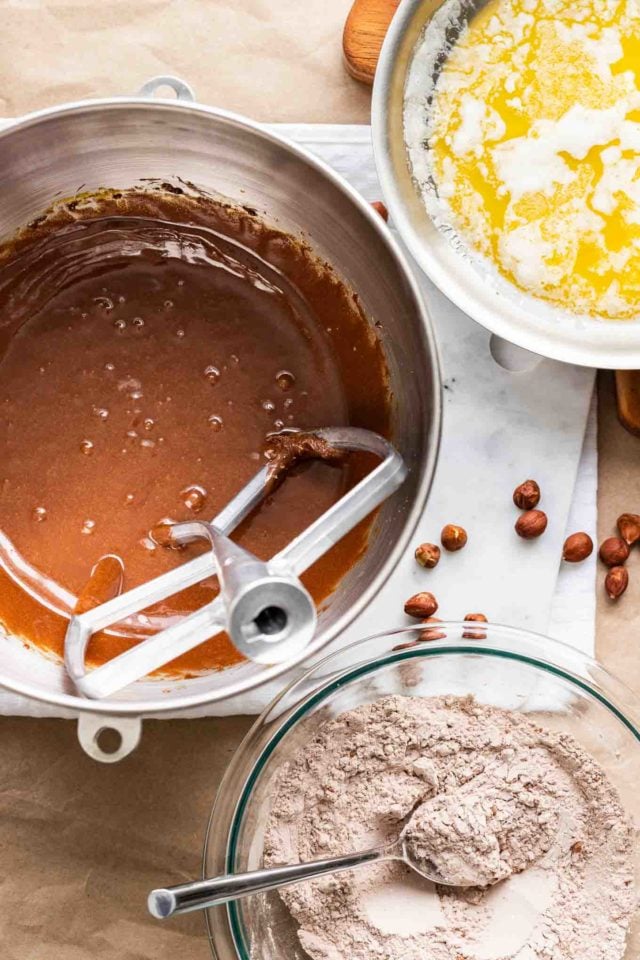 How long to bake Brownies

Underbaked brownies are too gooey and overbaked brownies are dry so hitting the perfect baking time is important when baking brownies. Every oven is different so it’s best to start testing for doneness after 20 minutes of baking time with a toothpick near the center. If the pick has wet batter on it, continue baking for 5 to 10 minutes and test again.

When are brownies done

Brownies are done when the toothpick comes out with a few moist crumbs still clinging. But it is always better to lean towards underdone rather than overdone.

How to store brownies 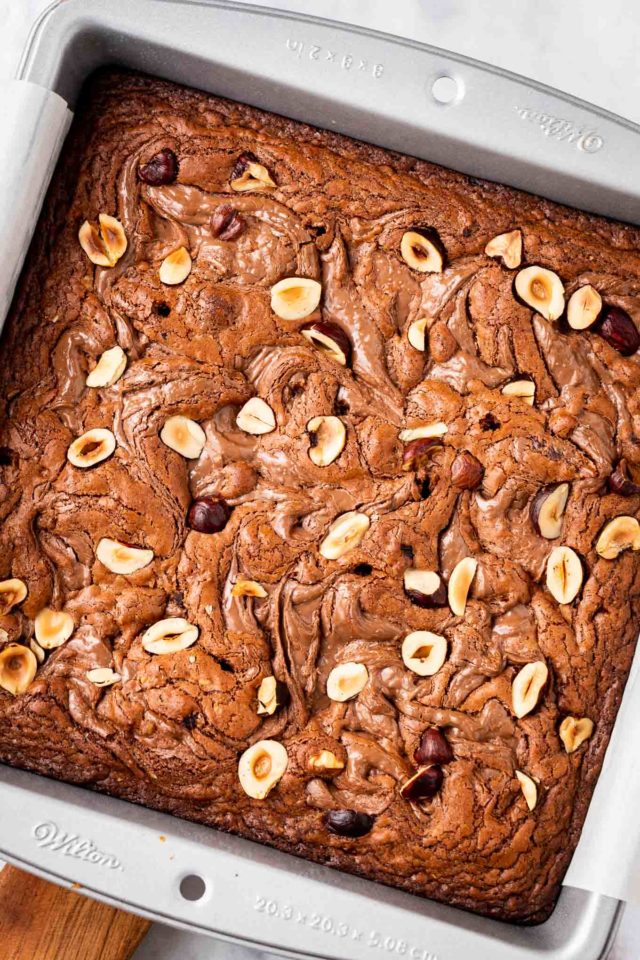 Nutella: Why not buy a bucket of Nutella?! We would go through it in a week =)
Baking Pan: This is my favorite baking pan for brownies. It’s easy to clean and bakes brownies evenly.
Parchment Paper: When baking brownies I always use parchment paper because it makes it easier to lift them out of the pan!
Hazelnuts: Nutella is made from hazelnuts so adding hazelnuts will deepen the flavor.