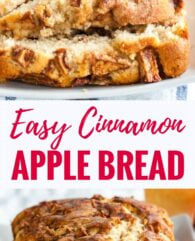 Apple Cinnamon Bread is quick and easy to make from scratch and makes your house smell amazing! Swirled with delicious spiced apples and topped with cinnamon sugar, this quick bread recipe is sure to be a fall favorite. 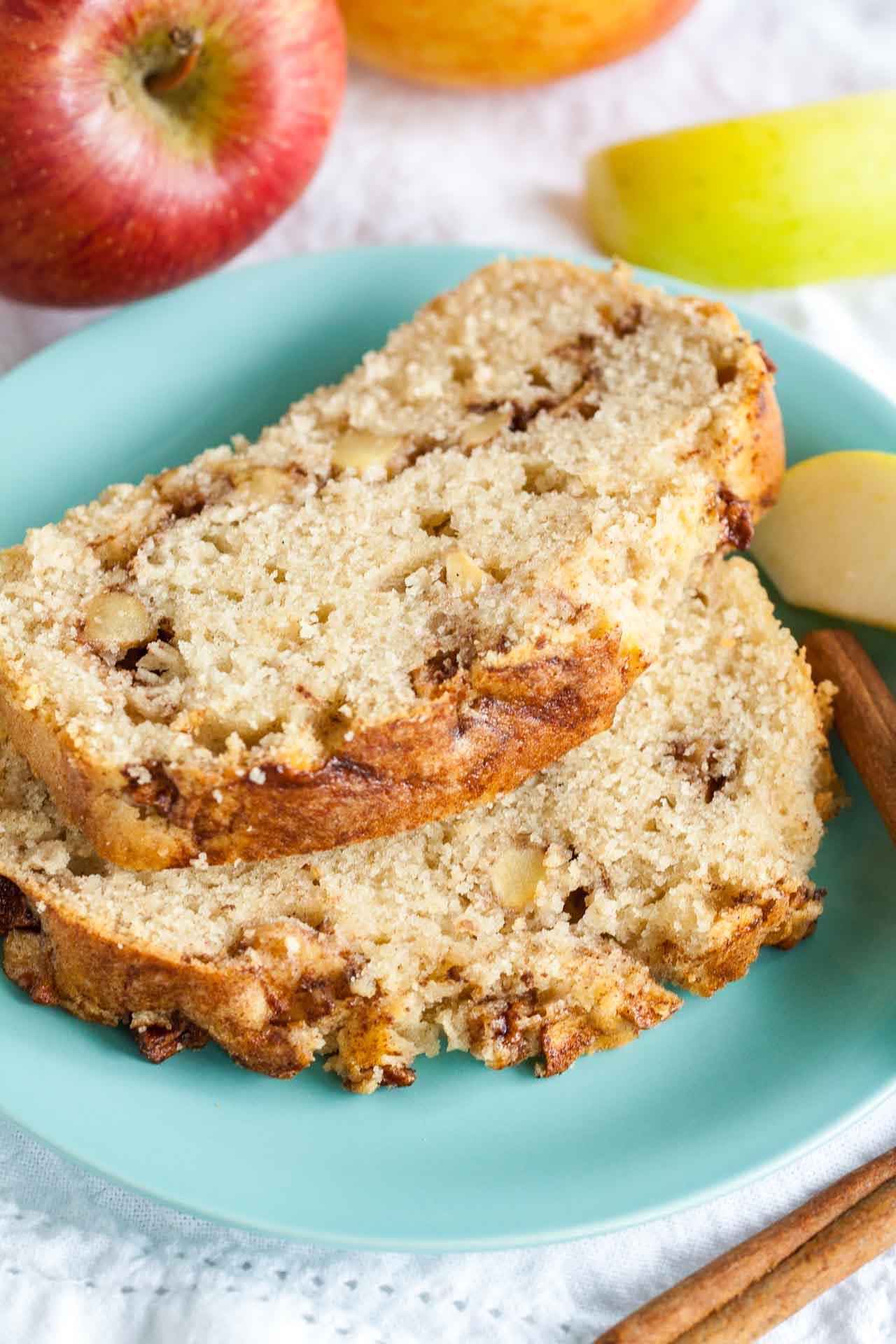 This apple cinnamon quick bread has a nice crumb and is not overly sweet – a perfect fall breakfast, snack or dessert! The chopped apple inside that’s mixed with brown sugar and fall spices like cinnamon and nutmeg makes this bread super moist without it being doughy and keeps it fresh for days.

This cinnamon apple loaf cake tastes great warm out of the oven but I love it even more after a day or two! The flavor of the cinnamon apples come through even more when the bread has rested. Perfect for busy days when you don’t have time to bake on the same day!

What I also love about baking this cake is that the house smells amazing afterward! No need for fall candles, this easy recipe comes with your favorite fall scents included! 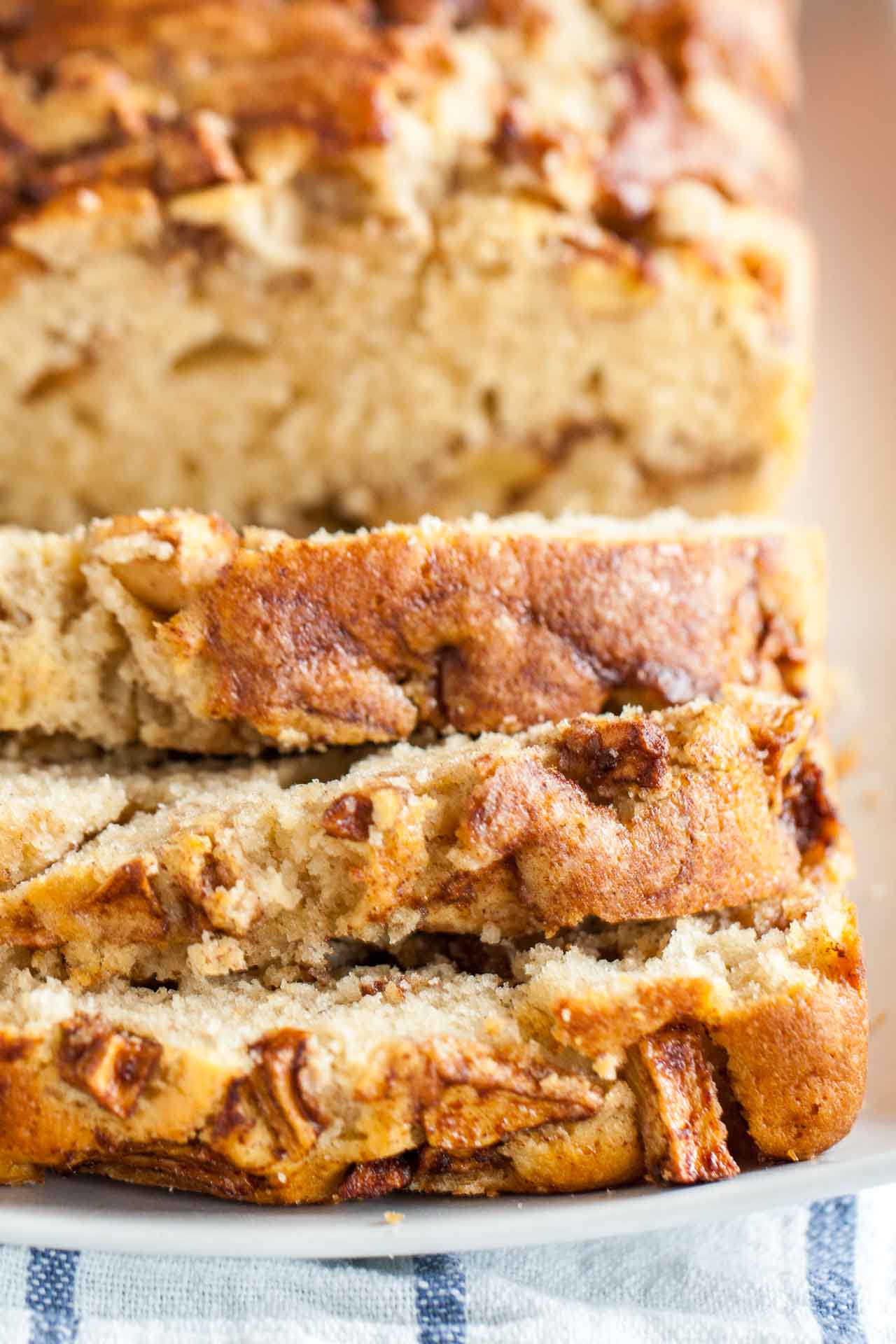 How to make Apple Cinnamon Bread

I’m on an apple kick lately! Ever since September started and the temperature has finally dropped I have been busy in the kitchen baking and most of my latest recipes are apple recipes. I love apple recipes all year round but somehow many people think apples are like pumpkins and baking with them is a seasonal thing. What about you? Luckily it’s technically autumn so making this apple cinnamon bread is totally ok! 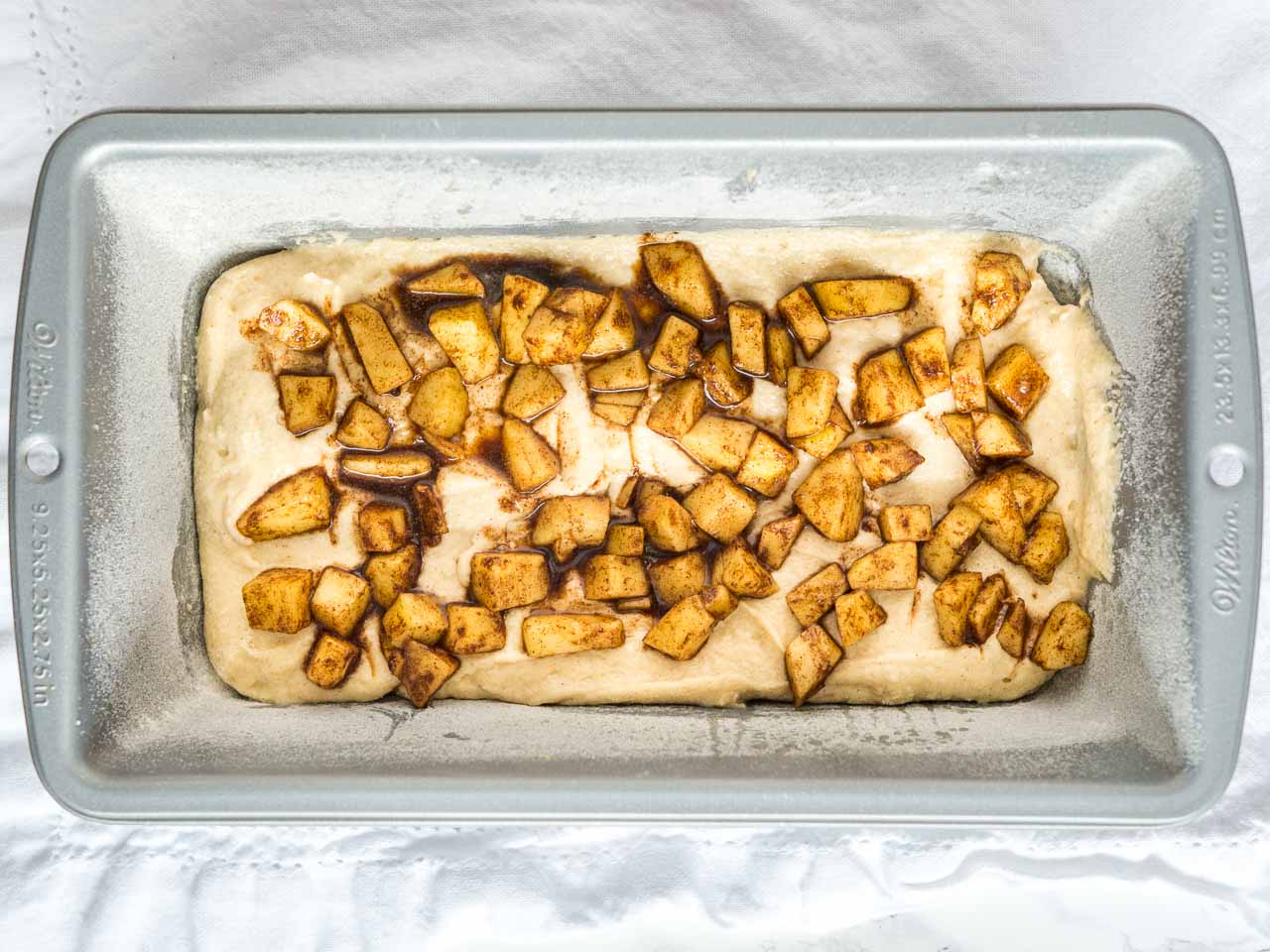 To assemble this quick bread spread half of the batter into the pan and top it with half of the brown sugar apple mixture. The batter will be thick so the apple chunks won’t think to the bottom.

Top with the remaining batter and the other half of the apples. Try to distribute them evenly then use a knife to swirl them into the dough a little bit. Sprinkle some cinnamon sugar on top and bake for about 50 minutes. 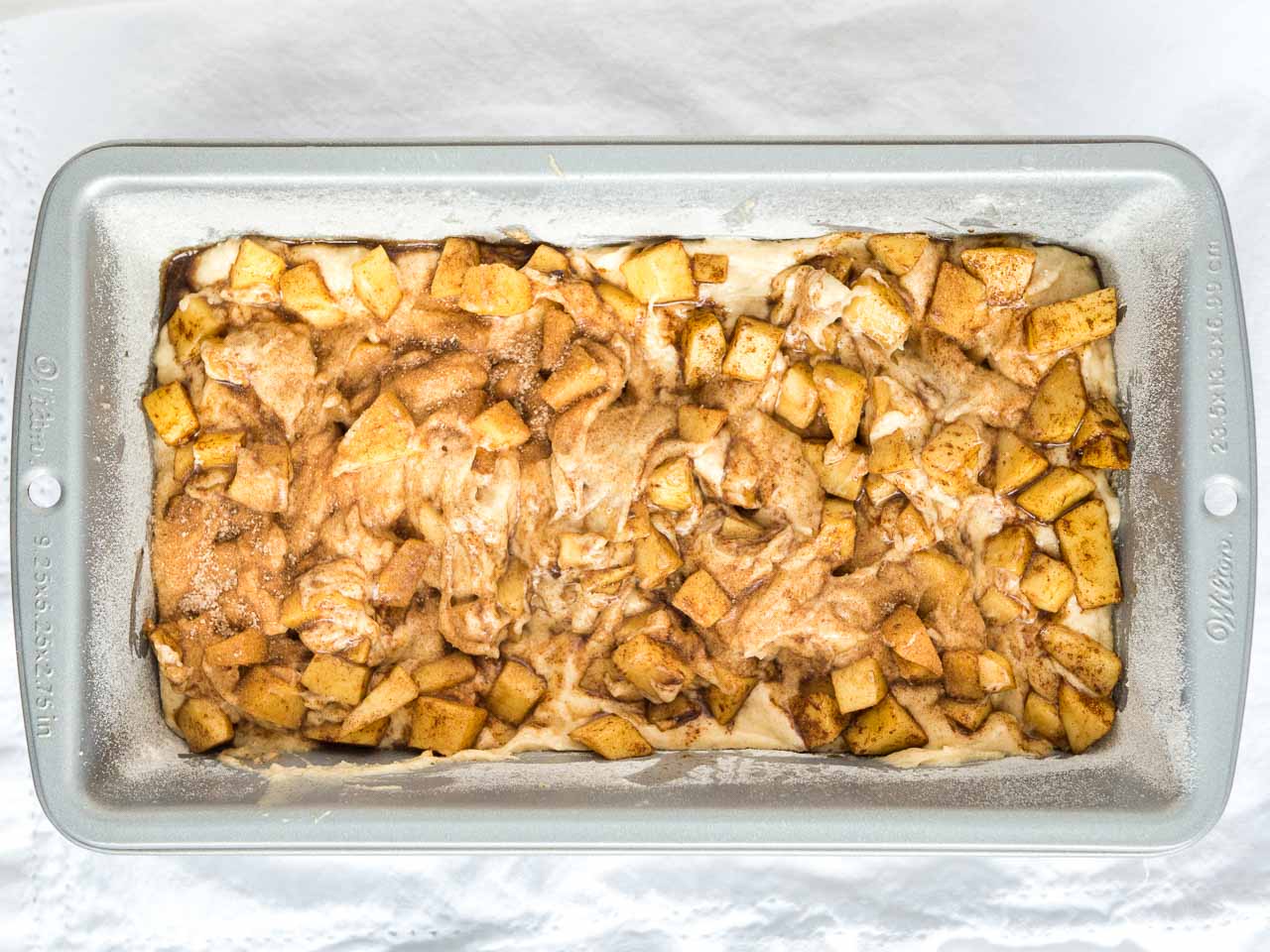 When the bread is done take the pan out of the oven and let it cool down for a few minutes in the pan before transferring it to a cooling rack. 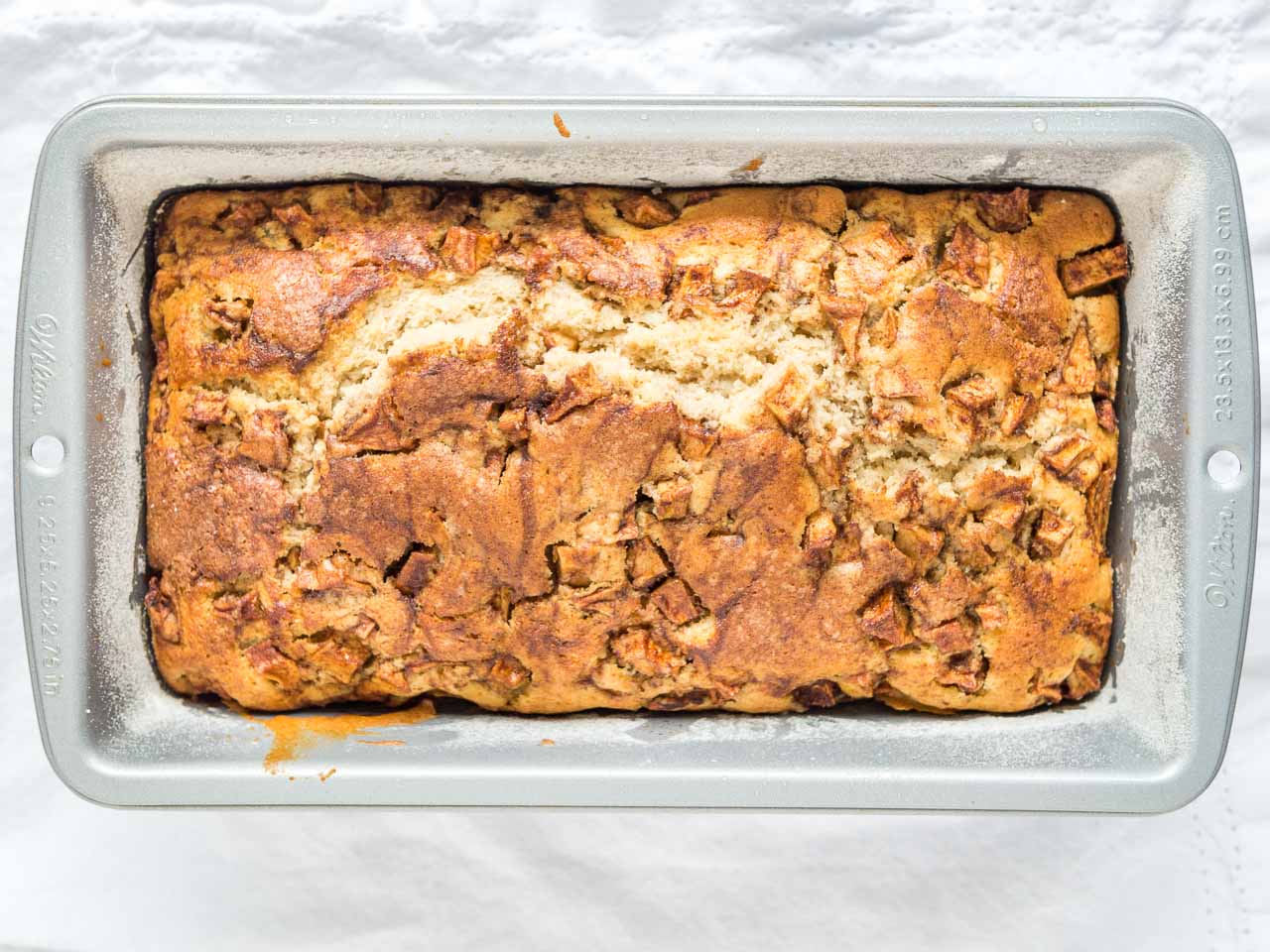 How to make this apple quick bread healthier

To make this bread a bit healthier you can switch out half of the butter and replace it with unsweetened applesauce instead. This gives the bread an extra apple kick and lowers the calories. The crumb might be not as light but still tasty.

I wouldn’t recommend replacing all the butter with applesauce because the butter adds flavor and richness. Using only applesauce might result in a rubbery texture.

You can also make this apple loaf cake healthier by reducing the brown sugar in the apple mixture. Especially if you use really sweet apples you probably won’t notice a difference. I would not recommend reducing the granulated sugar that’s needed for the cake batter because creaming the sugar and butter together gives this bread it’s volume and texture. Reducing the sugar will result in a drier more dense texture. 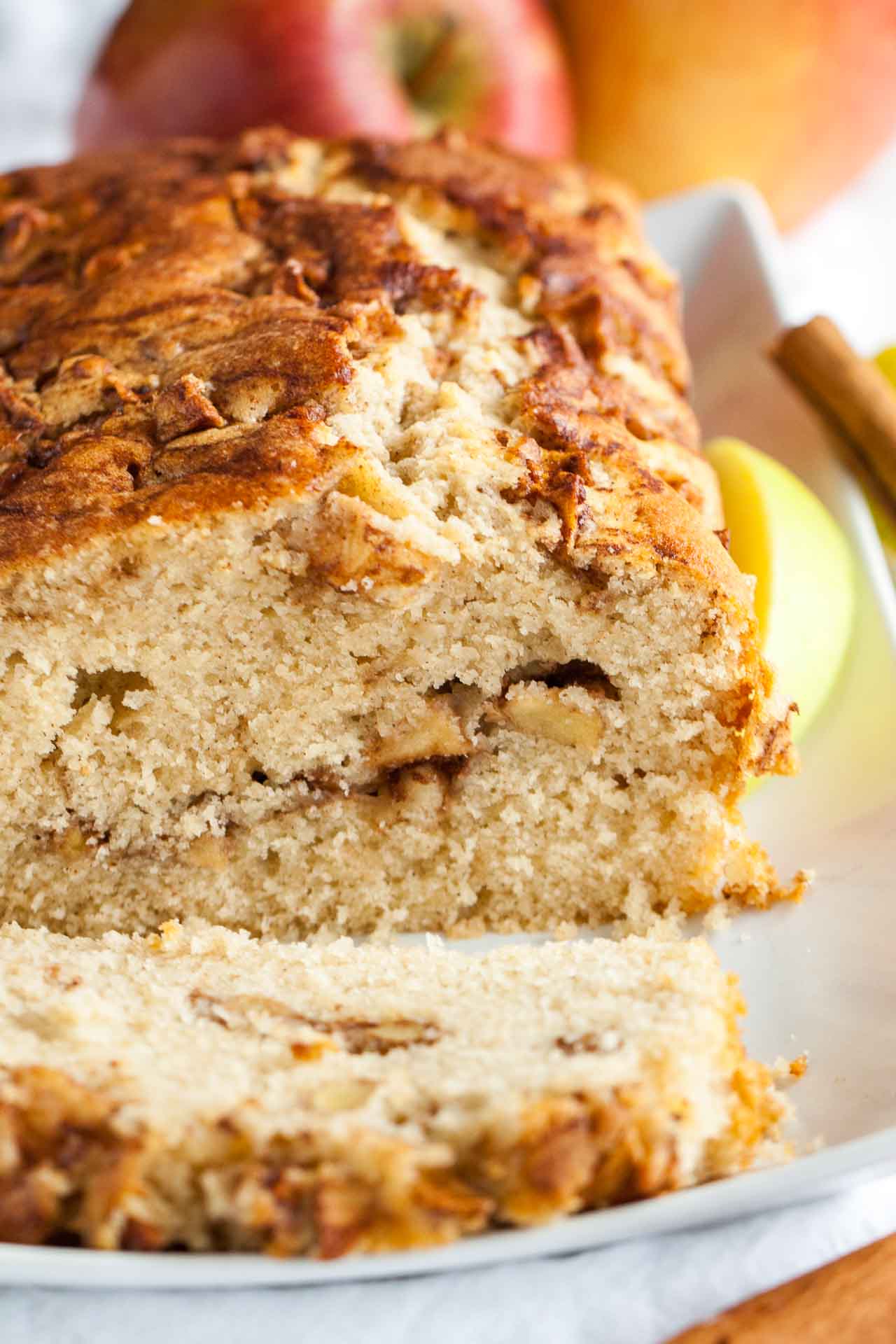 How to store apple bread

This bread keeps fresh covered at room temperature for up to 4 days. I think it tastes even better on the next day but most of the time it is already gone on the first.

Can I freeze apple bread?

Yes, you can! Bake it, cool it, wrap it up in aluminum foil and freeze the bread as a whole. Allow to thaw overnight in the refrigerator and bring to room temperature before slicing and serving. Freezes well for up to 3 months.

Looking for more easy apple recipes to make this fall? 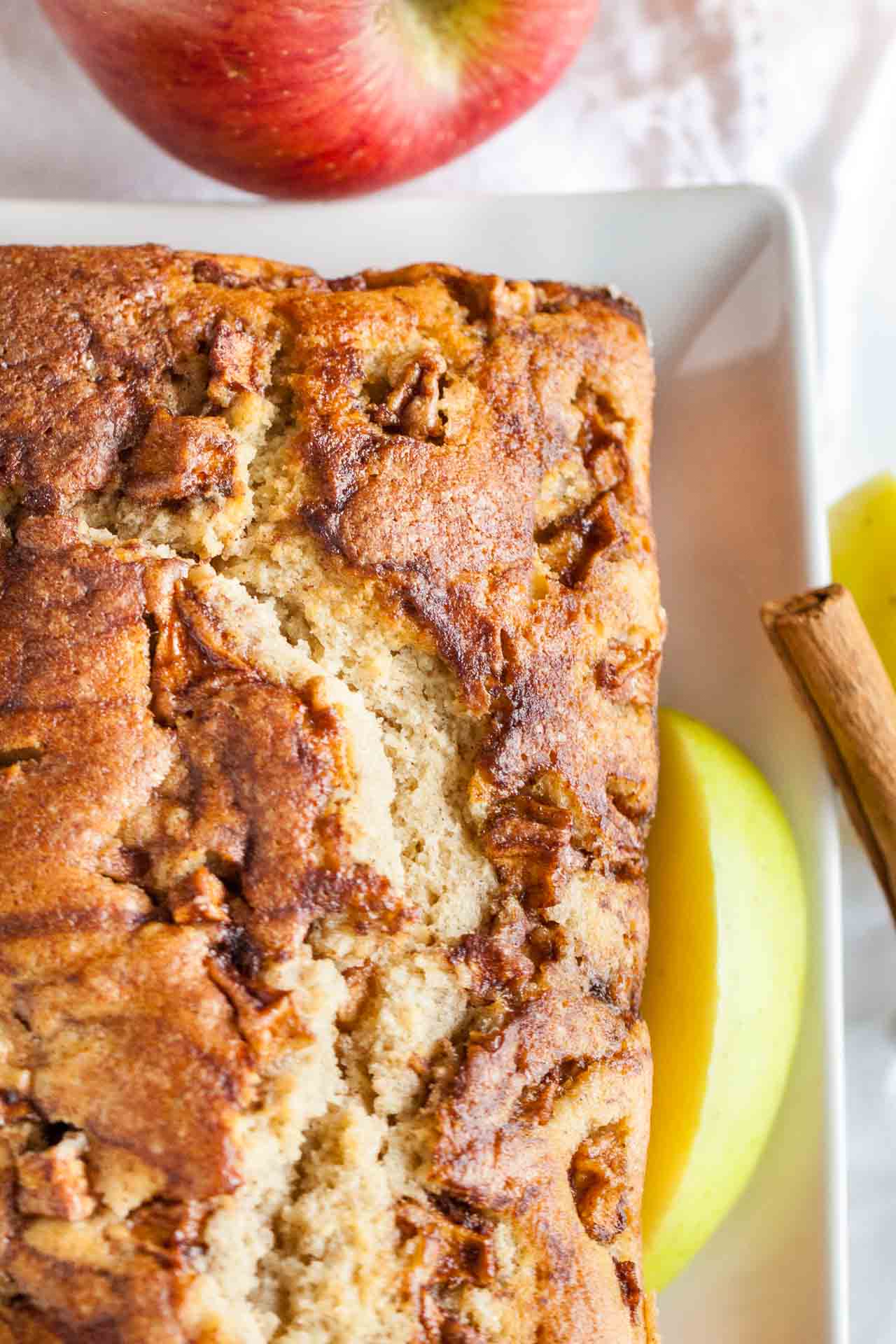 I hope you love this apple bread recipe as much as we do! Please, let me know in the comments below. I’d love to hear your thoughts!

Watch how easy it is to make this recipe!

Loaf Pan: I really like this loaf pan because it has a non-stick coating that really works and it is easy to clean.
Stand Mixer: My most used kitchen appliance and it’s so pretty it can sit on the counter as decoration!
Cinnamon: I go through so much cinnamon this time of the year so I bought this one to always have it on hand! 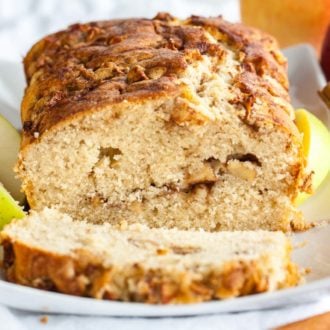 For the Apple Mixture: 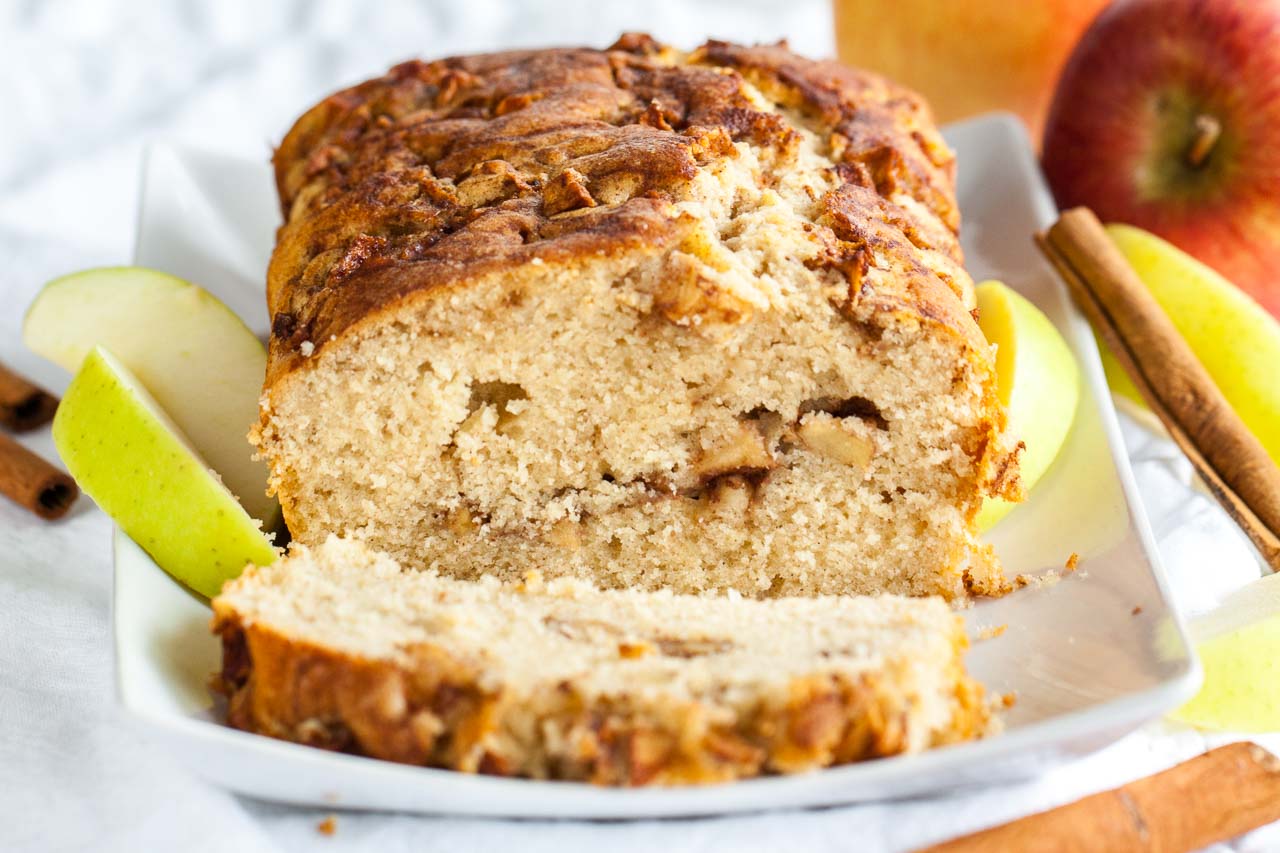 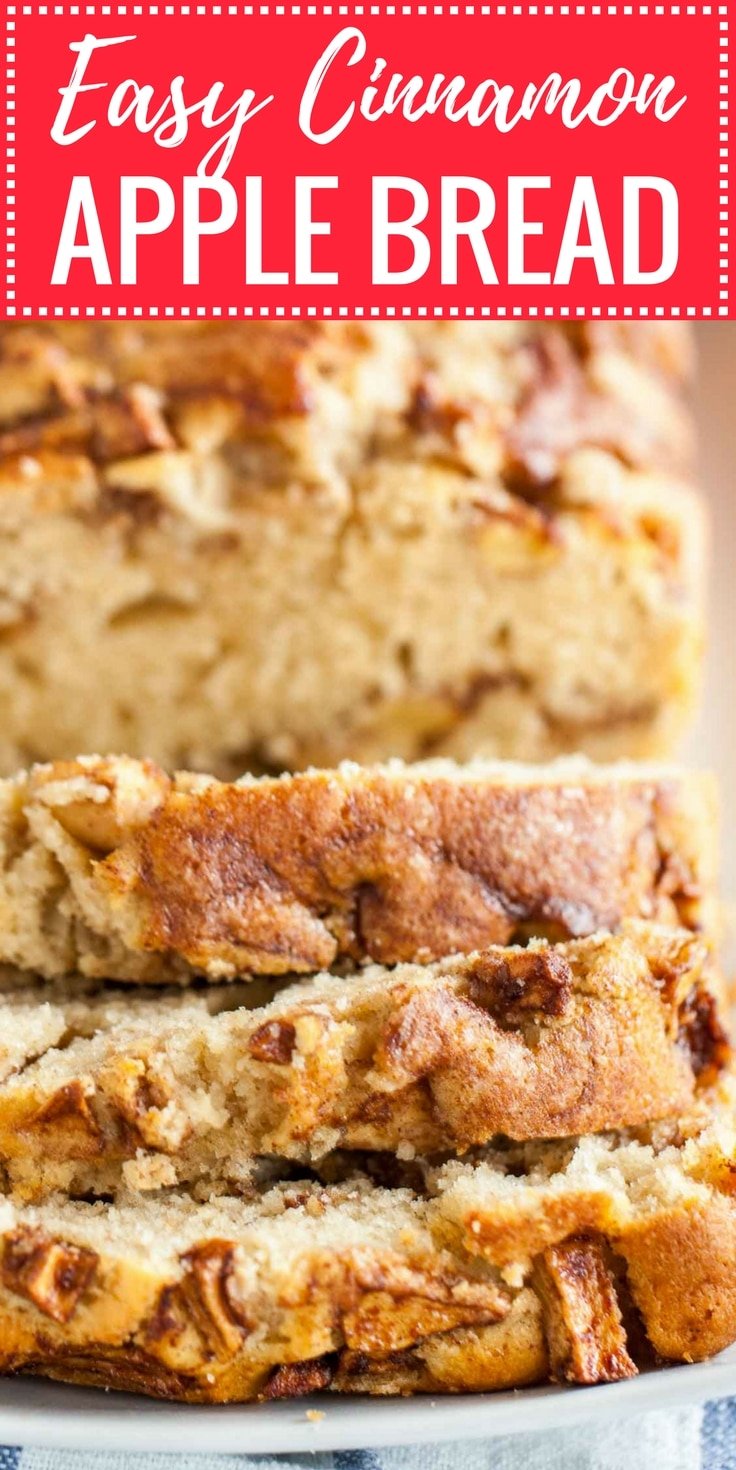